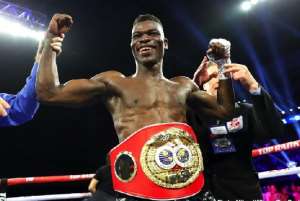 Richard Commey, IBF World lightweight champion, could return to the ring to make his first title defence on June 28 against a yet-to-be-named opponent.

The 31-year-old hard-hitting Ghanaian fighter is considering his options as he looks to be fully fit before opting to fight in unification with Vasiliy Lomachenko later this year.

Commey (28-2, 25 KOs), has returned to his New York base ahead of his upcoming defence having been passed fit of a hand injury he sustained during an explosive second round stoppage win over Isa Chaniev on February 2.

Speaking to badlefthook.com, the Manager of Commey, Michael Amoo-Bediako, stated that the champion was in line to make his much-anticipated return on a June 28 Top Rank card pending approval.

Mr Amoo-Bediako noted that his outfit was weighing up options for Commey with the likes of Ray Beltran, Teofimo Lopez and Felix Verdejo all being considered as possible opponents for the Ghanaian.

“For the next fight, we don’t really know. It’s possible June 28, I think from Top Rank, that’s all I know. Richard is excited to fight one day at Madison Square Garden, he hopes one day to top the bill there.

“Richard fought on the Top Rank show in February, there was one option (granted to Top Rank) to fight Loma. We are all a happy unit at the moment. That landscape is opening up. Loma has titles, you have Verdejo and also Ray Beltran over there, it’s interesting. Everything is amicable; we will see what Richard wants to do. We’ll have another round of talks,” he said.