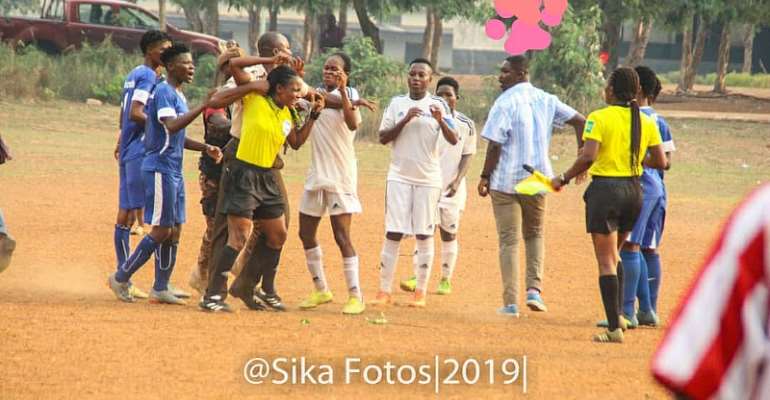 Prison Ladies FC have been handed a Ghc5,000 fine for an assault on referee Theresa Bremansu by one of their supporters when they lost to Ampem Darkoa in the first leg of the Women’s Special Competition semifinal clash on 8th April.

Mavis Owusu gave the visitor the lead in the 48th minutes at the Army Park in Sunyani which Prison Ladies failed to equalize.

At the end of 90th minutes, referee Bremansu was assaulted by a Prison FC supporter who felt the referee was bias in her decisions.

“I was attacked by a prison officer who was wearing a black top in the full glance of the public. I cried for help but nobody came to my rescue. I called for his arrest and nobody moved a finger.

They all saw this man beating me up. After beating me, their masseur had the gut to tell me she wishes I was beaten to death,” referee Bremansu said after the incident.

“Referee Theresa Bremansu was attacked by a guy many people say he is a prison officer. He slapped the referee from behind. She has sustained injuries on her face as a result.”

Prison Ladies has also been ordered to produce the assaulter not later than 30th April, 2019.

According to the Disciplinary Committee, “the club shall be liable to further sanction of 2 home matches ban in any competition pf the GFA anytime from the date of this decision, upon failure to fully comply with the orders herein.”