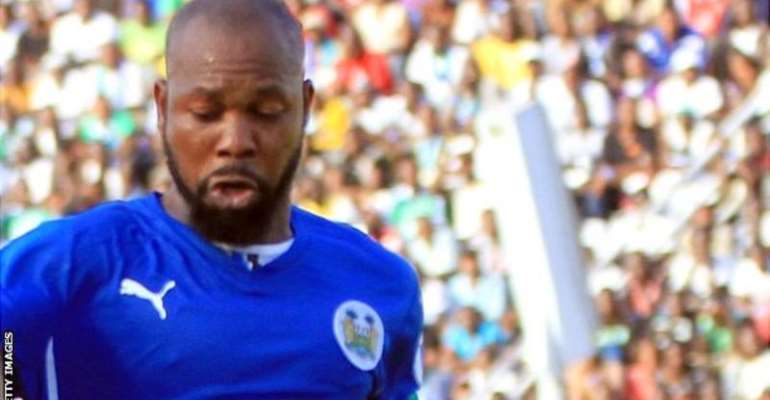 Former Sierra Leone captain Ibrahim Kargbo is one of four Africans to have been banned from football for life for match manipulation by Fifa.

A 10-year ban was also given to former Kenya international George Owino Audi.

However, Fifa refused to give the details of the matches in question as it also issued a fourth life ban to a players' agent from Zimbabwe, Kudzanai Shaba.

Owino has already announced his intention to appeal while the others have yet to comment.

Not for the first time, the involvement of Singaporean Raj Perumal - a convicted match-fixer who has been closely linked with several manipulated matches in Africa - has been central to the case.

"The formal disciplinary proceedings into the aforementioned individuals stemmed from an extensive investigation into various international matches that Mr Wilson Raj Perumal attempted to manipulate for betting purposes," a Fifa statement said.

"This large-scale investigation was conducted by Fifa over several years through its Integrity Department and in cooperation with the relevant stakeholders and authorities.

"The decisions were notified to the individuals concerned today (Wednesday 24 April), the date on which the relevant bans come into force."

Kargbo, who represented Sierra Leone from 2000-2013, has previously been accused of match-fixing by the football associations of Sierra Leone and the Netherlands, where he played for Willem II in 2009, but has denied the charges on both occasions.

It is unclear if his case is linked to a long-standing investigation into potential match-fixing involving Sierra Leone during a World Cup qualifier in 2008.

Former Kenya international George Owino has been handed a 10-year ban by Fifa.

Meanwhile, Owino, who played for Kenya between 2008-2015, denied wrongdoing when Fifa announced in February that it wanted a full investigation into allegations that several Kenya internationals were fixed.

A detailed Fifa report said it had prima facie evidence that both Owino and Perumal conspired to influence the result of several Kenya internationals between 2009-2011, including a World Cup clash against Tunisia.

"We have received the ruling from Fifa but my lawyer is going to appeal," Owino told BBC Sport.

Tchomogo represented Benin at three different Africa Cup of Nations tournaments - in 2004, 2008 and 2010 - but there is no suggestion that any games at these events were subject to attempted manipulation.

At the time of publication, none of the four Africans to have been sanctioned by Fifa had commented about their punishments.

In addition to the African quartet, Fifa also handed out life bans to former players from Afghanistan, Cuba and Trinidad and Tobago.