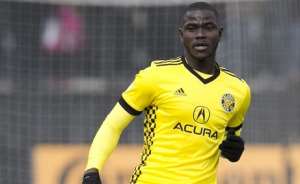 Mensah’s GoFundMe campaign is geared towards raising funds to support an orphanage through the purchase of a van to shuttle the orphans to school.

Already the foundation assists in the provision of food, clothing and other items to the orphanage and the Columbus Crew centre-back said he was shocked by the gesture of these young females.

Numbering about 15 with the oldest being 12 years, these girls sold baked goods, raffle tickets, the club merchandise and handmade bracelets to raise the funds.

Mensah, who was shocked by the initiatives of the girls, said: “They were like, ’Hey, we really like what you’re doing back in Ghana ... and we’d really like to help you in any way that we can.”

“It was just shocking and overwhelming for me. They’re little kids. Whenever they want to do something, I think they get it done.”

One of the girls, Kenadi, said she was moved to help Mensah’s foundation after watching a video about how some Ghanaian orphans walk two hours to school daily.

“We’re very fortunate to live here,” said Elizabeth Hess, 10, of Commercial Point. “Talking about all of this made me want to get involved. I want to make them live their best lives and not have to do all that walking.”