Navarrete Versus Dogboe Part 2 – Who Is Who? 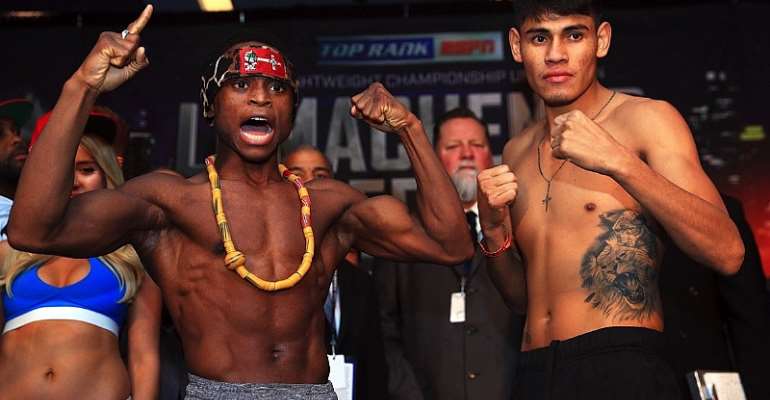 On May 11, 2019, while the Sports Writers Association of Ghana (SWAG) mark their 44th Awards Gala Night, the defending Sports Personality of the Year (2017), Isaac Dogboe will be in Arizona, USA fighting Emmanuel Navarrete for the World Boxing Organisation (WBO) Super Bantamweight at the Convention Center.

The fight has been dubbed ‘Revenge Or Repeat’ by boxing connoisseurs as both boxers have predicted sweet victory by way of knock out.

Mexican Emmanuel Navarrete was the first boxers to announce that he will knock out his Ghanaian challenger and former champion any time they clash for a return fight, and his team are very serious about retaining the title.

For Dogboe, who believes he was not ready to fight in the first bout which was his third defence due to injuries and travel tiredness, May 11 would be a different day and boxing fans are going to see the real fit Ghanaian from the Volta Region.

He told the media at a press conference at the Kempinski Hotel on Easter Saturday that he has trained enough at the beach of Keta, and gone through vigorous exercises to regain his fitness.

According to the 24-year-old boxer, from Anyarko, he is coming all out to win back the Super Bantamweight belt and move up in weight to the Featherweight division.

The former Olympian who starred for Ghana at the 2012 Olympic Games hinted that he has learnt many lessons in life and in the ring, and after suffering his first loss as a professional, the world must see him better in his next bout.

He said all his first three opponents went down by KO, so he thought Emmanuel Navarrete was a push-over, but the Mexican came well prepared and he won, but not the easy way, because he fought all the rounds and was gallant even in defeat.

Dogboe, now a popular pay per view boxer signed by Top Rank, owned by Bob Arum said against Navarrete on December 8, 2018, he was not fit so he relied on his skill, but skill and strength alone cannot beat the tough Mexican, so he will use all the 'S' in sports – Speed, Style, Stamina, Strength, Strategy and Support of Americans and Ghanaians to earn his victory.

BoxingGhana, Ultimate Sports, Modern Ghana, Africa Sports and the entire media in Ghana wish him well. Tough it is not easy, anything can happen in sports (boxing), and all that we pray for is victory for the best boxer on the day.