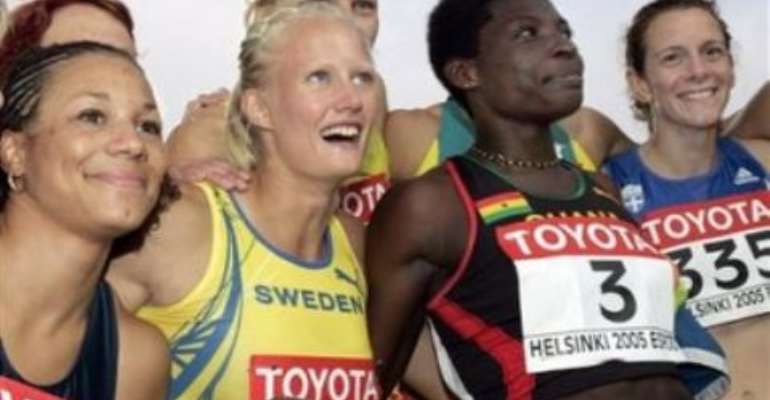 Accra, Jan. 3, GNA - Ghana had a high-flying sporting year embodied in the Black Stars first-ever qualification to the World Cup in Germany, a first time medal at the World Athletics Championship in Helsinki, Finland and an excellent showing at the African Hockey Cup of Nations in South Africa.

Mr O. B. Amoah, a Deputy Minister of Education and Sports in his assessment of the 27 sporting disciplines to the GNA Sports, reckons however, that next year promises to be more challenging for the nation as she prepares to participate in the African Cup of Nations in Egypt, the Commonwealth Games in Melbourne, Australia and the FIFA World Cup in Germany.

Also to test the preparedness and mental toughness of the country would be the commencement of works on three new stadia in the Central, Western and Northern Regions and the rehabilitation of the Accra and Kumasi stadiums as the nation braces itself to host the 2008 African Cup of Nations.

The Deputy Minister said although most of the performances of the various disciplines were not up to scratch, the qualification of the Black Stars and the amazing forms showed in athletics, hockey and cricket overshadowed the pitfalls in the other disciplines. He said the Black Stars team, the technical handlers, the Ghana Football Association and indeed the Ministry deserve tons of congratulations for making "the nation's long cherished dream a reality."

Mr Amoah noted that the Stars' qualification offers the most excellent opportunity to market the country, promote its ability, expose its capabilities, attract investors and tourists and generally contribute to Ghana's growth economically, socially and politically. He commended the government, the major sponsors, Goldfields and other allied sponsors including Guinness Ghana Limited.

The Deputy Minister was particularly elated at the achievements of Ghana's long jumper, Ignatius Gaisah and heptathlete Margaret Simpson for their emasculate performances at the World Athletics Championship in Helsinki, Finland.

Gaisah won silver while Maggie collected bronze to give Ghana her first-ever medal at the world event.

Also spectacular was the male and female national hockey team. The female team won silver behind host South Africa at the Hockey Cup of Nations while the males were bronze medallists.

He recalled the bizarre circumstances under which the national Under-17 soccer team, the Black Starlets lost to Gambia in the finals of the African Youth Soccer Championship in Banjul and the team's inability to glitter at the World event in Peru.

The Deputy Minister praised the Under-20 soccer team for qualifying for the ECOWAS finals in Abuja, Nigeria.

Special mention were made about the national Under-15 cricket team that won the ECOWAS tournament in Accra and Ike Bazooka Quartey's great comeback and his demolishing of Carlos Bojorquez in a non-title bout.

Mr Amoah said the presence of the two personalities focused attention on the country and expressed the hope that such visits would open doors for the nation in future.

Ghana was also elected to represent West and East Africa Commonwealth Nations on the Commonwealth Advisory Body on Sports (CABOS).

The Deputy Minister called on the sporting fraternity to brace themselves up for a more tasking 2006 but said "with a concerted effort we will succeed." 03 Jan. 06