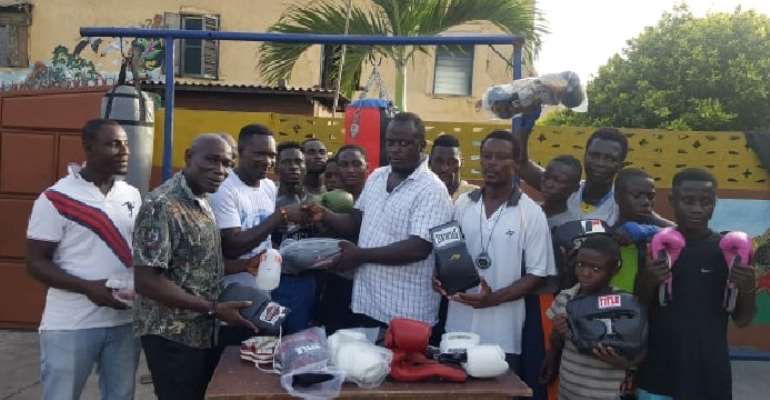 Samuel T. Quaye who presented the items on behalf of Yahya said the former champion who is now a coach in the USA is doing well and training other boxers to become champions.

Quaye said the items were brought to motivate the boxers in the gym to keep up their training and hope for better things t happen.

Coach Ebenezer Adjei aka Killer who received the items thanked Ossie Duran and wished him well. He promised that the Black Panthers Gym will come back as one of the best boxing gyms in Ghana. The items included gloves, head gears, waist gears, punching bags and water bottles.

The Black Panthers was formed by the late Emmanuel Tagoe aka Coach Akesi who trained the Clottey brothers and other.

Oumanu Yahya was one of the founding boxers of the gym which was founded in 1997. Before the Atlanta 1996 Olympic Games which is the reason he moved from amateur to professional and he excelled to win the best SWAG Boxer of the Year, then he went to the USA to continue his boxing talent by sharing to others through coaching.

Yours Truly on behalf of the Ghana Boxing Authority (GBA) thanked Yahya for the gesture and pray that he does it bigger next time.