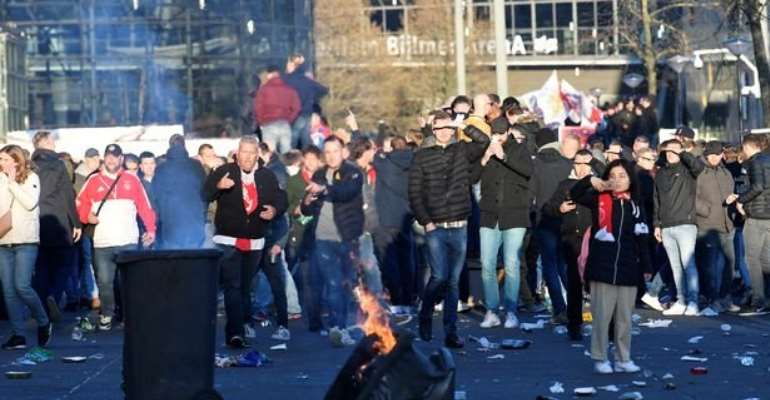 Italian police stopped 54 weapon-carrying Ajax supporters on the eve of Tuesday’s Champions League match against Juventus and will escort them out of the country on Wednesday.

The fans were stopped aboard buses on the outskirts of Turin on Monday.

Police are on high alert following clashes between Ajax and Juventus supporters ahead of the first leg of the quarterfinals in Amsterdam last week, when water cannons were used by the authorities and dozens of fans were arrested.

Turin police say the fans aboard the buses were also found in possession of armored gloves, mouth guards and various types of fireworks and smoke bombs.

“We’re fighting against every type of violence inside and outside stadiums,” Interior Minister Matteo Salvini tweeted. “Certain DELINQUENTS should never step foot in a football ground again!”

Salvini, the leader of Italy’s far-right League party, added that the fans — who were not arrested — will be led away to the border according to a security decree.

The first leg, which ended 1-1, also included a fan jumping over the barriers and approaching Cristiano Ronaldo when the Juventus star scored. UEFA is investigating the incident and Ajax faces disciplinary charges after supporters threw objects the game.

More than 2,000 Ajax supporters are expected to attend Tuesday’s match at Allianz Stadium.