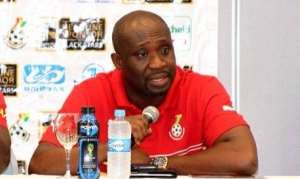 Bankroller for Lower Division side of Okyeman Planners, Mr. George Afriyie has charged head coach for the Black Stars, James Kwesi Appiah to come up with a strong side capable of winning gold medal at this year’s Africa Cup of Nations (AFCON).

The Black Stars will have another opportunity to battle the rest of Africa in search of continental triumph which has eluded them for over 3 decades now. They are expected to compete with defending champions Cameroon, Benin and Guinea Bissau in the Group phase of the tournament which will kick start in June.

Speaking with Joy FM on the sidelines of the official draw in Cairo last Friday, the formal vice president of the Ghana Football Association (GFA) indicated that coach Kwesi Appiah must continue to scout for players until the end of the European football season to ensure he comes up with the right squad for the 2019 AFCON.

“The European seasons is still ongoing. The coach needs to do some bit of monitoring from now, just as about a month to do monitoring and then come out with a realistic squad. A squad that is capable of winning the AFCON”, George Afriyie said.

The prestigious tournament will be hosted by record winners Egypt and is expected to run from June 21 to July 19, 2019.

Ghana will play Benin on June 25 in their opening match of the campaign.