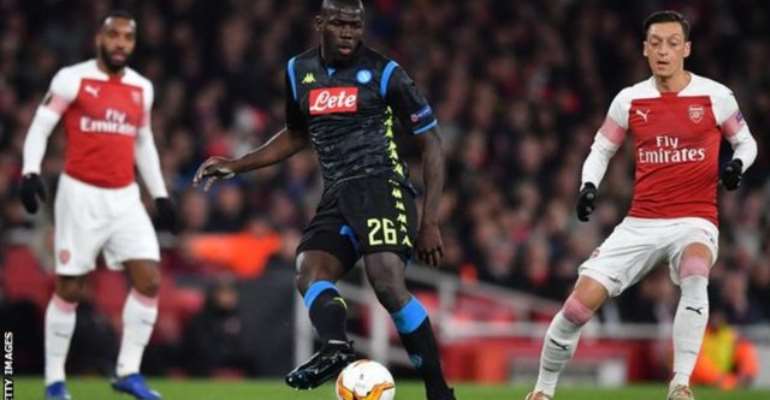 The supporter can be heard using a racial slur in the video, filmed during Arsenal's 2-0 Europa League quarter-final first-leg win on Thursday.

"We utterly condemn use of this type of racist language," Arsenal said in a statement on Friday.

The club reiterated they have a "zero-tolerance" approach to such behaviour.

"We have launched an investigation to identify the culprit," the statement added.

"We operate a zero-tolerance approach and anyone behaving like this is not welcome at Arsenal and will be banned from matches.

"We have an extremely diverse community of fans who are all part of the Arsenal family and such incidents are rare at the Emirates Stadium.

"We encourage supporters to report any incidents as they happen to stewards or via our matchday alert service."

English football has suffered several high-profile racism incidents in recent months. Arsenal striker Pierre-Emerick Aubameyang had a banana thrown at him in December, an action that landed the fan responsible with a fine and a four-year ban from football.

When asked about racism in football following Thursday's game, Aubameyang said he was "really disappointed" about it.

"I had the same problem here against Tottenham," he added. "When you are black like me it is really painful, I think because we are in 2019 and obviously it is not good for football in England. Hopefully, we will find a way to kick it out."