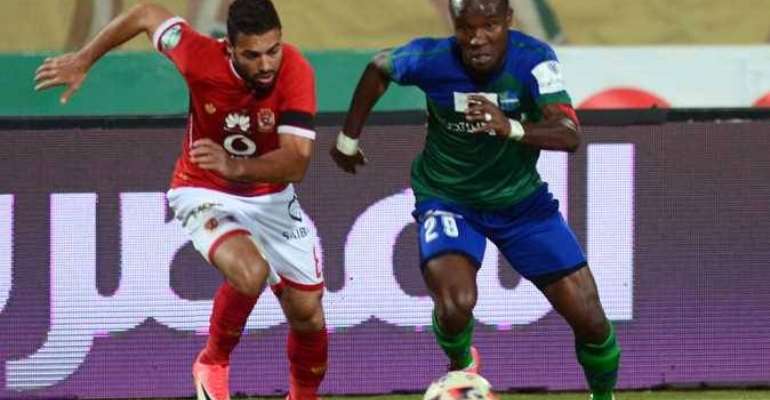 John Antwi plays for Misr El-Makkasa -The 26-year-old has currently scored nine goals in 22 league appearances. He is on record to be the top foreign scorer in Egyptian history.

John Antwi Duku born on 6 August, 1992 is a Ghanaian professional footballer who plays for the Egyptian side Misr Lel-Makkasa SC, on loan from Al Ahly SC, in the Egyptian Premier League as a Striker.

Dreams F.C.
The footballing career of John Antwi began with Dreams F.C., a Ghanaian club that competed in the third division of the league.While playing for Dreams F.C. he was invited to the 2010–2011 preseason training programme of Accra Hearts of Oak SC. The invitation was proved fruitful as his form showed by scoring five goals in seven friendly matches.

Sekondi Eleven Wise F.C.
Antwi began his professional football career with Sekondi Eleven Wise in the Ghanaian coastal city of Sekondi in 2011. After a year playing in the league he joined Ismaily in December 2012 on a five-year deal. He was purchased for two hundred and fifty thousand US$.

As at the end of the day two of the 2013–2014 Egyptian Premier League, Antwi was the leading top scorer with four goals.

Al Shabab FC
On 26 January 2015, Antwi joined the Saudi Arabian side Al Shabab after Ismaily agreed to a deal for $2,200,000 in a two-and-half-year contract.

On 6 February, Antwi made his club debut as a replacement for Abdulmajeed Al Sulaiheem in the 52nd minute against Al Khaleej, but he failed to score as the match ended in 1–0 away defeat.

On 12 February, Antwi was chosen for the starting XI for the match against Al Fateh, he scored his first goal for the club in the 61st minute as the match ended 2–2.

On June 15, Antwi signed a four-year deal with Al Ahly.

National career
The goal scoring exploits of John Antwi are closely monitored in his home country of Ghana. In mid-2013 there were several calls for the player to be included in the Ghana National Football Team, the Black Stars, for the 2014 FIFA World Cup qualification matches.Though the player was omitted from the national team, his form has continued to encourage the handlers of the national team who continue to watch his progress.

Youth career
Antwi was named as a member of the provisional team for the 2013 FIFA U-20 Youth Championships.

Senior career
He was called up to the senior Ghana squad for a World Cup qualifier against Uganda in October 2017, he is yet to make it real with the Black Stars, and playing at AFCON 2019 in Egypt would be a great experience and advantage for Ghana as he is familiar with the terrain in the Pharoahs land.