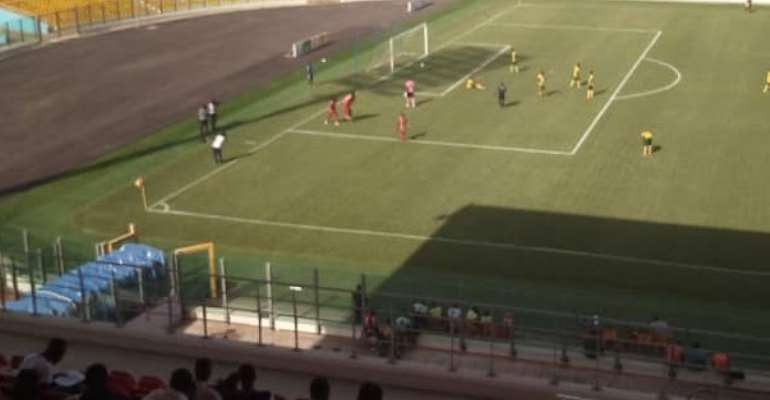 Prior to the mid-week fixture, Hearts had lost two successive away games by a single goal margin on all occasions.

First, they lost to Elmina Sharks on Match Week 2 before being beaten by Karela United just last weekend.

The Phobians determined to end their winless run got off to a good start as they capitalized on the first opportunity they had in the match to take the lead.

Former Dwarfs go-getter, Joseph Esso latched onto a through ball before firing home for his first goal on the day.

The hardworking attacker was rewarded with his second of the day on the 39th minute when he cleverly beat the offside trap. One on one with the away side’s goalie, he smartly went around him before putting the ball in the back of the net.

With the prospect of more goals in the second half following an impressive first-half performance from the victors, Dwarfs improved their game to keep Esso and co at bay.

The visitor’s resilience paid off with just 15 minutes remaining when Bright Luqman headed home from a corner kick. A couple of minutes later, Esso was presented with an opportunity from the penalty spot to score his hat-trick but the player was denied by the Dwarfs lanky goalkeeper.

Next up, the Accra based side will be facing in-form Liberty Professionals on Sunday, April 14, 2019, at the Dansoman Carl Reindorf Park. The match is expected to kick off at 3:00pm.