Hazard bags a brace to move Chelsea up to third 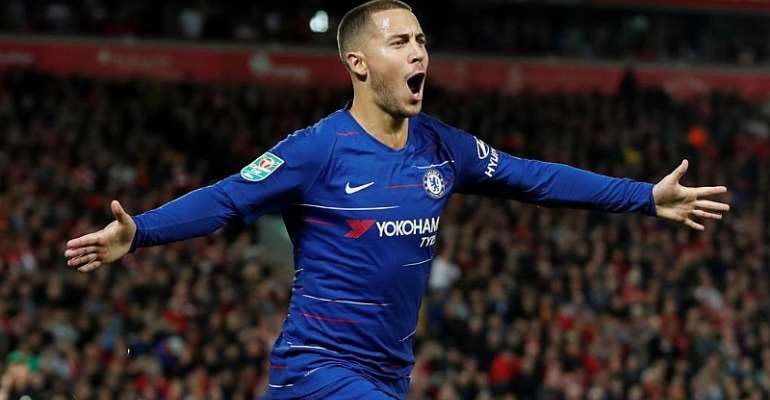 Eden Hazard struck twice on Monday night as Chelsea beat West Ham United 2-0 to move up to third in the English Premier League. Hazard's first midway through the first-half was a snap for the Stamford Bridge scrapbook.

The Belgian collected the ball just inside the West Ham half and surged forward leaving three defenders in his wake before coolly slotting past goalkeeper Lukasz Fabianski.

"It was something special," Hazard told Sky Sports. "I took the ball and then I tried to move forward. In the box it was hard for the defender to challenge me because if he touches me it could be a penalty.

"I was maybe a little lucky with the shot. I wanted to shoot quickly. When I saw the ball in the net I was just so happy. I am small so it is good when I play against tall players as it's very hard for them to change direction."

The second goal came in second half stoppage time.
Hazard controlled inside the box and fired into the far corner for his 19th goal of the season.

Rise
Victory moves Chelsea two points clear of Tottenham Hotspur and three ahead of fifth-placed Arsenal in the race for a finish in the places which lead to next season's Uefa Champions League.

However Tottenham, Arsenal and Manchester United have a game in hand on Maurizio Sarri's men.

After a third consecutive Premier League victory, Sarri hailed Hazard who has been linked with a 120 million euro move to Real Madrid.

"That's too cheap in this market," said Sarri. "We have seen in the last few windows every price. I'm sure the club doesn't want to sell him. But of course we all have to respect his decision.

"He is in the last season of contract, if he wants to have another experience we have to respect it. We will try in any way to convince him, but it is not easy."