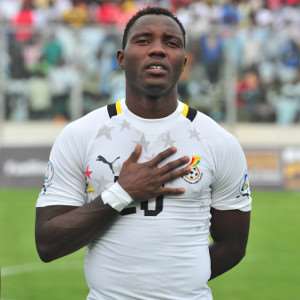 Ghana and Inter Millan midfielder, Kwadwo Asamoah has revealed he never forgets the first goal he scored as a professional footballer.

Asamoah, 30, recounted his goal for the Black Satellites against Senegal.

“I will never forget the emotions of my first goal as a professional. It was a match of the Under-20 national team and we played against Senegal,” he told Inter TV.

“We were away from home and since that team was full of great players, I was still entering among the holders.

“That day I played from the first minute. The coach gave me confidence and I scored from a counter attack collecting a cross from the right.”

Since then, Kwadwo Asamoah has progressed into the senior national team becoming an instrumental part of the team.

In club football, the former Udinese man won six scudettos with Juventus before moving on to join Inter Millan.

"You Were Not A Vice President When MoMo Was Introduced 11ye...
38 minutes ago