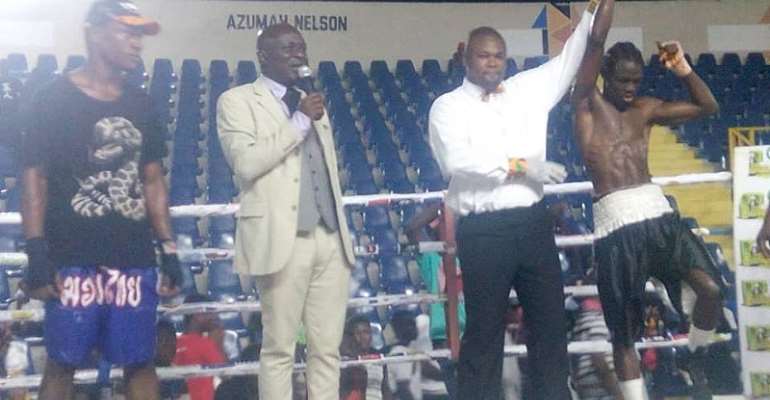 The organisers of the exciting Bukom Fist of Fury Boxing League have released the League Table after Week 9 and Discipline Boxing Club near the Usher Fort are comfortably in the lead with 11 points from 20 bouts.

They are followed at second spot by Sea View Gym located at the Sacred Heart SHS at James Town with 10 points from 16 bouts winning 14, losing 2 and drawing once.

Fit Square led by Jessie Lartey, the amateur boxer of the year with coach Lartekwei Lartey in charge are third with 10 points from 20 bouts, winning 11, losing 8 and drawing 2.

The Gym, one of the well-equipped gyms in Accra Central, near Enterprise Insurance and Salenko Beach Resort is fourth with 8 points from 20 bouts, 11 wins, 8 losses and 2 draws.

Bronx /Accra Boxing Club (BA) is fifth, Akotoku Academy at sixth, Wisdom which is handled by coach Asare, the technical director of the Ghana Boxing Federation (GBF) and head coach of the Black Bombers is 7th with 6 points from 16 bouts, 10 wins, 6 losses and 3 draws.

Coach Quartey of CQBF said the league has been good and brought out the best from the boxers and trainers. He said the fans have been good, cheering the boxers where ever they go to perform and gave thumbs up to th GBF president George Lamptey and Moses Foh Amoaning, the originator of the concept as well as the media who have been publishing the fixtures and results.

Coach Lartekwei Lartey of Fit Square said the Bukom Fist of Fury has indeed helped his boxers to be in top shape and hopes to win the league at the end or place a comfortable position among the top three.

George Nipa, a boxing fan who has been following the programme said the League is good, exciting and thrilling, and has made him know some places in Accra like Sukura, Abeka and Osu where the bouts were held to bring fans attention and awareness.

George Lamptey, the GBF president has also congratulated the boxers and coaches. He said it is not easy, and appealed to companies who want the programme to be maintained or regularly shown on TV to support.

Peter Zwennes, the GBA president said he was confident and sure that the league will succeed and provide the nation very good amateur boxers who can represent the nation at international Games and win laurels.

He said the boxers have so far shown that they are very capable and can do it if given the necessary encouragement and exposure.

Meanwhile, after the successful boxing night at Abeka Manste Agbonaa, many chiefs and Assembly members, as well as opinion leaders in some localities, have called on the organisers to bring the league to their areas.