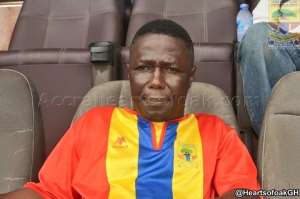 Board Member of Hearts of Oak, Alhaji Akambi says his side can qualify to play in Africa next season despite their poor start in the Special Competition.

After three matches played in the Normalization Committee Special Competition, the Phobians have won one and lost two.

The Phobians lost against Karela on matchday three at the Cosby Awuah Memorial Park in Ayinese on Sunday.

Diawise Taylor’s only goal of the game condemned Hearts to their second defeat of the competition.

"It is our target to win all our matches and qualify to Africa next season so we can't use just three games to judge the team. We have more games to play so the supporters should calm down and keep supporting the team", he told Ash FM.

On the performance of the team after their last three games, he said: “Friendly matches are different from competitive matches so I know the team will get it's the best form with time. Hearts of Oak have a compact team with the best players so I know we will find our scoring boots soon because the players are playing a very beautiful game".

He added that here have been a lot of improvements in the team since Kim Grant took over and pleaded with the supporters to give the team some time to adjust to the competition.

"I know the Coach will work on all the shortfalls within the team towards our next games and I hope we will see an improved Hearts of Oak team in our next games," he added.

Hearts of Oak will be hoping to return to winning ways as they host Dwarfs in matchday four of the Special Competition on Wednesday, April 10, 2019, at the Accra Sports Stadium.