'No Security Came To My Aid' - Assaulted Theresa Bremansu Reveals 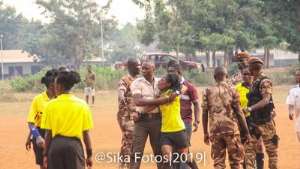 Referee Theresa Bremansu has revealed that no security personnel came to her rescue when she was attacked.

The experienced match official was assaulted by fans during a Normalization Committee Special Women's Competition on Sunday.

Madam Bremansu was the centre referee in charge of the first-leg semi-final game between Prison Ladies and Ampem Darkoa Ladies at the Army Park in Sunyani.

According to reports, she was assaulted by some irate fans of Prison Ladies for not adding enough added time during the tie.

The fans rushed the pitch after the game and assaulted the referee, blaming her for causing their team - Prison Ladies - to lose the clash 1-0.

She told Accra-based Asempa FM that she was attacked in the full glare of the public but no one came to her rescue.

She said she was beaten like an armed robber by a male fan and her cries drew no sympathy from the spectators.

COVID-19: You Won’t Enjoy Free Water If You Owe Us – GWCL
8 minutes ago

We're Disappointed In Akufo-Addo For Not Condemning Soldier ...
34 minutes ago