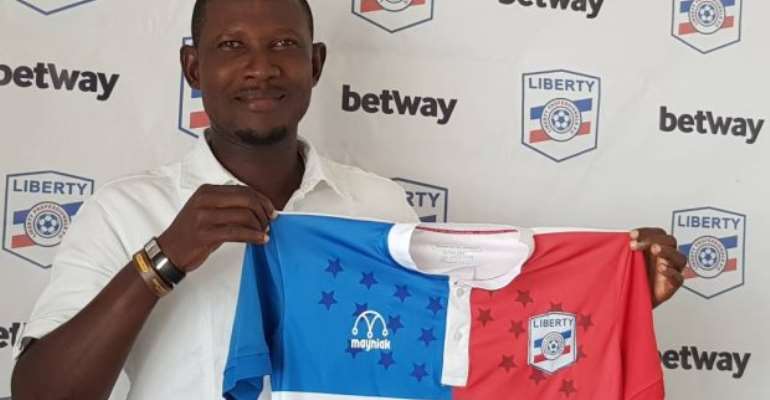 Head Coach for Liberty Professionals, Reginald ‘Reggae’ Asante has indicated that the clubs is aiming to make the Carl Reindorf Stadium a fortress following their impressive start to the Normalization Committee (NC) Special Competition.

The team after losing their opening match of the NC Special Competition 3-1 to WAFA has gone two matches unbeaten and sit well on the Tier 2 table just a point behind leaders Karela United.

The Dansoman based side have been unplayable at home picking up a maximum of 6 points from all the two games they have played. First, they demolished Ebusua Dwarfs by four goals to nothing before dispatching Inter Allies by two goals to nil just yesterday.

Speaking to Joy FM following their win yesterday, Coach Asante stressed that indeed it is their goal to make the Carl Reindorf Park a fortress where teams will just come and suffer.

“Yes, certainly that’s our target now. That’s what we have decided to do. Any team that passes around must at least fall”, the gaffer said.

He further revealed that there is a revival at the club and they are finding their feet as the competition progresses. Despite admitting that Liberty has had their challenges in the past, the hard-talking coach opines that he is content the team is gradually picking up their rhythm and performing so well.

“There is a great revival in Liberty Carl Reindorf Park. I think everybody knows what we are capable of doing. Due to one or two reasons, things went bad for us but I think there is a change now so any team that is coming here we are praying that they should stand well because Liberty is now picking the rhythm which will baffle the whole Ghana”, he added.

In their next match, Liberty Professionals will play Elmina Sharks at the Nduom Stadium on Wednesday, April 10, 2019. The match will kickoff at 3:00pm.