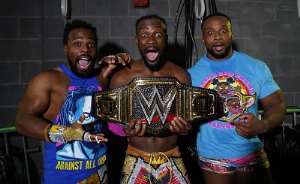 The Ghanaian wrestler, Kofi Kingston has become the first African World Champion in the WWE after winning the WWE Championship at the World's Biggest Pro Wrestling event, WrestleMania.

Kingston after 11 years in WWE won the title from Daniel Bryan at WrestleMania 35 at MetLife Stadium in New Jersey, and you can imagine the emotions coursing through him.

Well, you don’t have to imagine. You can watch:

“It’s so emotional. Like, you work so hard to get here and sometimes you work as hard as you can and things aren’t going your way, you know? And you don’t know if the hard work is going to pay off. It’s paying off right now. It just feels surreal. It feels like a legitimate dream. ... I feel like I’m in a dream, and I don’t want to wake up.”

He goes on to say that maybe the best part is how much support everyone gave him, not just the fans but his contemporaries. He is a true babyface you can’t help but love and appreciate.

Watch the moment Kofi Kingston won the title below;

Kofi Nahaje Sarkodie-Mensah (born August 14, 1981, in Kumasi, Ghana) is a Ghanaian-American professional wrestler currently signed to WWE, under the ring name Kofi Kingston, where he performs on the SmackDown brand and is the current WWE Champion in his first reign. He is also a member of The New Day along with Big E and Xavier Woods.

After graduating from Boston College, Sarkodie-Mensah decided to pursue a professional wrestling career. He began performing on the New England independent circuit as a Jamaican wrestler by the name of Kofi Nahaje Kingston.

After signing a developmental deal with WWE in 2007, he shortened his ring name to "Kofi Kingston".

Kingston debuted in WWE in 2008 using the same Jamaican character as he did on the independent circuit. In late 2009, he stopped being billed from Jamaica and dropped the accent although he kept his ring name. He then started being billed from his home country of Ghana.

He is the first African-born world champion in WWE history as well as its 30th Triple Crown Champion and 20th overall Grand Slam Champion (13th under the current format).

In addition, Kingston himself holds the singular record for most days spent as a Tag Team Champion within WWE and is also known for innovative ways of suspending his elimination from Royal Rumble and battle royal matches. With the exception of a few months spent as a heel (villainous character) in 2015 with The New Day, Kingston has been a babyface (heroic character) for almost the entirety of his WWE career.