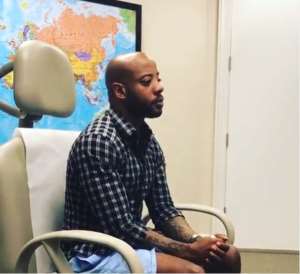 Former Ghana international Manuel "Junior" Agogo has revealed that he can no longer write with his right hand after suffering a stroke over four years ago.

The former Nottingham Forest and Zamalek striker in a video post on social media said he has difficulty moving and controlling his right hand.

"It's (right hand) better but it ain't like before," Agogo said in a slurred speech (below).

He said he spent two months in the hospital after suffering the debilitating illness on December 8, 2014. He suffered the illness just two years after ending his football career and has been praised for his impressive recovery.

In 2017, Agogo told the BBC Four documentary titled Speechless that he had troubles with speech following the illness which he says has left him lacking confidence and socially isolated.

According to the BBC, two years after his stroke when just 35 years old, Agogo is still visiting the Neuro Rehab Unit of the National Hospital for Neurology and Neurosurgery in London's Queen Square as he battles to find his way in the world with depleted language.

The forward began his career with the Owls, playing three games for the then Premier League side between 1997 and 2000.

He went on to score over 100 career goals, his most notable spell coming with Bristol Rovers, for whom Agogo scored 45 goals in 140 games between 2003 and 2006.

He also helped Nottingham Forest to promotion from League One in 2007/2008, finishing as the club’s top goalscorer as they finished runners-up in the division.

Agogo enjoyed a cult following during his 27-game stint with the Black Stars of Ghana scoring 12 goals.

The producers of the documentary, Speechless describe it as a "fascinating and moving, upsetting and uplifting in its depiction of the isolating and estranging condition, aphasia".