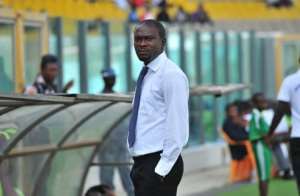 Asante Kotoko coach, CK Akonnor has revealed that his side struggled against Medeama SC.

The Reds suffered their first loss in the Special Competition at the Tarkwa T&A Park on Thursday evening.

Seth Kwame Boateng coolly converted the first-half penalty was enough for the Mauve and Yellows on a rain-soaked pitch in Tarkwa.

Speaking to the media after the game, the former Ghanaian international admitted his side is struggled to match Medeama.

"We were struggling in all department of the game in the sense that we lost a lot of key players," he said after the game.

“We also played without a striker and it’s a problem with the players suspended due to the fact that there is a little misunderstanding with the way we handle things."

"But hopefully we will rectify that very soon and get us going."

The Reds have won one and lost one in two matches played in the NC Special Competition.

Kotoko will face Techiman Eleven Wonders at the Nkoranza park in their matchday three fixture.