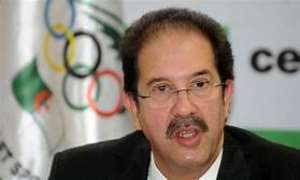 As delegates to the biggest assembly of sports journalists in Africa converge in Accra.the leading sports body in the continent ANOCA has declared its readiness to work with the output and solutions offered in the course of the discussions and presentations made in this 6th congress of AIPS AFRICA. Hailing the existing collaboration between both associations the new president of ANOCA Mustapha Berraf said he was waiting anxiously to receive the report of the 6th Congress.

In a letter to Michel Obi AIPS AFRICA PRESIDENT, he said "I praise the themes that will be discussed and the fruitful talk shops that I do not doubt they will be resulting in pertinent reflections on the African sports media and the challenges of hosting big game..wishing you success in your congress proceedings of which I wish to receive the report. "declared Berraf in a message sent to AIPS AFRICA President Mitchell Obi.

The ANOCA leader who was recently elected in Tokyo is in Rwanda for the first ever ANOCA Zone V Youth Games which started Tuesday and ends on Saturday.

In the sports journalists congress which opens formally in Accra April 4th delegates from across the continent will take a critical look at the future of the All Africa Games after a presentation by a team from the Sports Ministry in Morocco, host of the continent"s biggest games starting August in the twin cities of Rabat and Casablanca.

It is the first All Africa Games to be coordinated by the Association of National Olympic Committees in Africa (ANOCA) and it will serve as qualifiers to the 2020 Olympic Games in Tokyo for many sports federations, easily the attractive turning point from past continental games including the last edition four years ago in Brazzaville, Congo , interestingly the premier host.

AIPS AFRICA is holding its 6th Congress in Ghana and Michel Obi believes the number of countries taking part will be a record. In attendance would be Ghana's Sports Minister, Hon Isaac Asiamah, GOC President, Ben Nunoo Mensah and the Director General of the National Sports Authority, Prof. Peter Twumasi.

SWAG President Kwabena Yeboah said he is impressed with the preparation and interest showed by Ghanaian sports journalists in activities of AIPS and ANOCA.