Kim Grant Pledges To Make Hearts of Oak A Fearsome Side 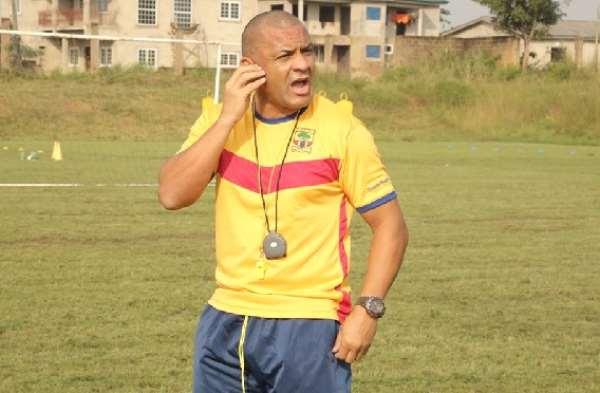 The 46-year-old tactician is confident that before his three-year contract runs out with the Phobians, he would have instituted structures that would make the team stronger and competitive both on the domestic scene and on the continent.

In an exclusive interview with the Graphic Sports, last Wednesday he said he was committing his first year into team building following which his transformational agenda of the club would be felt by everybody.

“My long term plan is to be successful, win the league, get into CAF competitions, and be good, progressive each year after I’ve built the foundation that we can have a long term sustainability of being in that competition every year.

“I’ve got a three-year mandate but this first year will be more of the foundations put in place to build it for next year following which the team will get stronger and stronger each year,” noted the head coach and technical director who took charge of the club four months ago.

Hearts are suffering an unusually long trophy drought and Grant hopes to be the club’s “Mr Fix-It”, by achieving what 10 coaches (both substantive and caretaker coaches) have failed to achieve since the 2008/09 season when the Phobians won their 20th and last Ghana Premier League crown.

Since their last domestic league title, the Phobians have watched their arch-rivals, Kumasi Asante Kotoko, claim the title three years running (2012-14), two titles by Aduana Stars and a title each by Berekum Chelsea, Wa All Stars and AshantiGold.

Already, Grant, who joined the 2000 CAF Champions League and 2005 CAF Confederation Cup winners from Ghana Premiership side, Elmina Sharks, believes that his transformation agenda is beginning to manifest as has been witnessed in his 15 wins in 19 games he had played so far with the club.

He said since he took over, he had been able to change many things about the club, including the tactical philosophy, players’ work ethic, attitude on and off the field attitude, as well as self-belief.

“Obviously, a change of philosophy, the way of thinking, more professionalism, better attitude to approach both on and off the field and instill believe in the boys and to trust each other.

It’s not about me but for the players to start trusting each other, which is vital, play as a team and not as individual because it is not an individual game,” Coach Grant said.