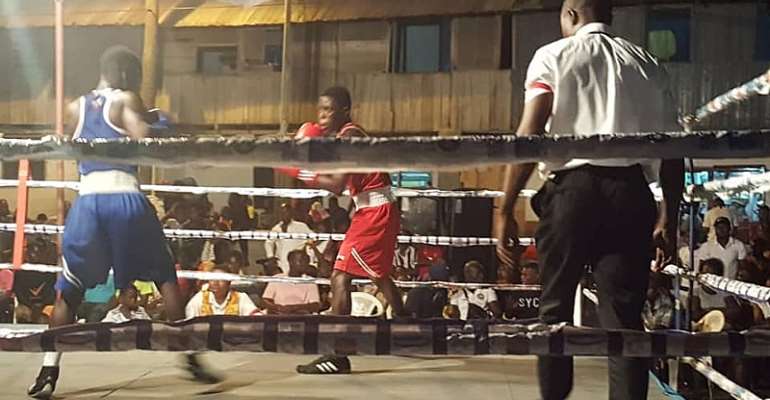 The exciting Bukom Fist of Fury Boxing League Week 9 gravy train which moved from James Town and stopped at Abeka Manste Agbonaa drew a lot of boxing fans to the fight venue.

There were 12 amateur bouts for the league and juvenile boxers on parade as well as female pugilists, Sarah Botchway and Osumanu Faruza who thrilled the spectators from all walks of life.

Some members of the Black Bombers, the national boxing team were on the bill and they justified themselves.

Light Heavyweight Samuel Laryea of Bronz Gym set the ball rolling with a 5-0 points win over Suleimana Mohammed of WM, before his club-mate, Felix Nunoo defeated Alidu Suleimana also of WM 5-0 on points.

Isaac Neequaye continued the good run for Bronz Gym with another 3-2 points win over Prince Arhin of WM in the Middleweight division.

Light Flyweight Philp Ajom ensured that Bronz Gym boxers won all their matches as he won 5-0 on points against David Tagoe of WM.

Issah Awal of The Gym could not stand Enoch Tetteh of Black Panthers Gym in the Light Heavyweight division, as he lost 0-5 on points.

Welterweight Sampson Segbedzi of The Gym beat Nick Tagoe of Black Panthers 5-0 on points before Flyweight Michael Abban revenged for his club with a 3-2 decision victory over Isaac Aryee of The Gym.

Mr. George Lamptey, president of the Ghana Boxing Federation (GBF) expressed satisfaction with the crowd who asked for another show.

He said the gravy train will keep on moving and boxing fans should expect Bukom Fist of Fury in their localities.