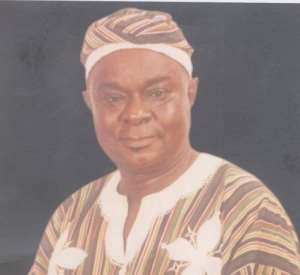 He worked assiduously to reverse the trend
Kotoko placed fourth to Hearts in Simms’ first year in office in the 1978 national league and Hearts retained the trophy the following season.

This irked the hardworking football administrator to work overtime and he appointed a former national sports director, Ohene Djan, special adviser to assist him with his vast experience.

At a durbar in Kumasi on May 3, 1980, to climax a novelty Kotoko week celebration, Ohene Djan was officially introduced to the Kotoko family.

And you can trust Ohene Djan to make his light shine at the least opportunity.

In his trademark populist style, the former FIFA executive member amidst thundering cheers said” Just as Okomfo Anokye came from Akuapem to help King Osei Tutu to build a strong Asante nation, so will I, an Akuapem, help Simms Mensah to rebuild Kotoko into a fearsome side again.”

True to his words Kotoko won the league twice in succession and became such an impregnable force that when Simms left the scene in early 1982 he had left a really solid foundation.

Indeed, his successor, the indefatigable Ernest Yaw Bawuah, did not find it too difficult to make a league hat-trick for the club.

He went as far as the final in the champions league where Kotoko lost to Al Ahly of Egypt.

Not to take any credit from Yaw Bawuah, it may be no exaggeration to say that the solid foundation helped Kotoko to become Africa champs in 1983 after the earlier fiasco in 1982.

For the records, the idea of turning the various supporters groups into circles was mooted by the Simms administration.

My position as Sports Editor of the Daily Graphic brought me close to Simms and I regularly visited his office that was incidentally on the Graphic Road.

I realised that he was always collaborating with Hearts chairman, Tommy Thompson.

No wonder as soon as Hearts of Oak named the supporter's groups as Chapters, Kotoko also formed the Circles.

Simms was such a team player and a friendly character.

The idea of self-sponsorship by clubs for CAF competitions was also mooted by Simms and Ohene Djan who wrote a long memo to the National Sports Council and the idea was accepted.

It worked perfectly at the time but the current economic atmosphere has admittedly made it a big problem for clubs and in my view, may need a review.

Ghana football has lost a forward-looking administrator who was extremely eager to enjoy the company of sports writers.

May he rest in perfect peace.