Premier League: 10 Things To Look Out For This Weekend 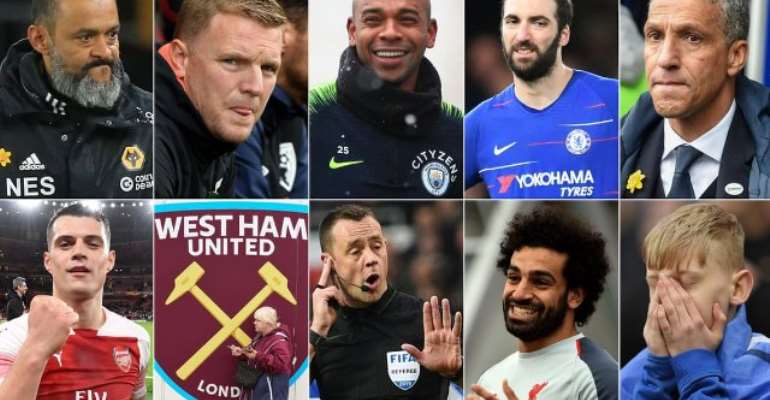 Fernandinho should be fit for Man City, Mohamed Salah will be refreshed and Huddersfield could go down on Saturday.

Manchester City could welcome back Fernandinho, Kevin De Bruyne and John Stones from the treatment room when they travel to Fulham for the first of nine fixtures in 30 days. Fernandinho is considered by many to be City’s most important player, including Pep Guardiola who has previously said the Brazilian is indispensable. His team have done just fine without him though, winning five games in three different competitions since he limped off in the latter stages of the Carabao Cup final. During the 33-year-old’s spell on the sidelines in December, City lost both league games they played in his absence and needed penalties to see off Leicester in the Carabao Cup. Despite maintaining a perfect record without him this time, they will be delighted to welcome him back at such a crucial time of the season. BG

2) All’s not well with Attwell
This will be the fourth time this season Stuart Attwell has refereed Manchester United, and the fourth time in history he has refereed Watford. There is nothing coincidental about this: he is probably fairly popular at Old Trafford, having given United a penalty on three of the past four occasions he has officiated their matches. The first time he refereed a Watford game, nearly 11 years ago, he awarded an infamous “ghost goal” to Reading. He has returned to Vicarage Road once since – five years ago. He wasn’t well received and hasn’t been asked back, and last officiated a Watford match in December 2014. As a result, it is more than usually important that at key moments on Saturday he must be certain, and he must be right. Any game-changing decision in United’s favour that turns out to have been incorrect will surely prevent him from ever refereeing Watford games again. Will he be able to put this history to the back of his mind? SB

3) A record-equalling relegation for Huddersfield?
Defeat at the hands of Crystal Palace on Saturday could consign Huddersfield to the joint earliest relegation in Premier League history. Consigned to the drop after 32 games of the 2007-08 season, Derby County hold the record, but Huddersfield will match it if they lose and Burnley and Southampton both win. While a paucity of international players may go a long way towards explaining Huddersfield’s predicament, the fact that only four members of their squad – Slovenia’s Jon Gorenc Stankovic and the three Danes, Jonas Lössl, Zanka and Philip Billing – were summoned for international duty means Jan Siewert has had time to try to get the majority of his players around to his way of thinking after blowing a two-goal lead in defeat against West Ham last time out. Having been first-team staples under David Wagner, Zanka and Billing have had significantly reduced game-time under Siewert and it will be intriguing to see if they feature after their spells away with Denmark. Juninho Bacuna, almost ever-present under Siewert, is a doubt for Saturday. BG

4) Salah will be fresher than Son after the international break

Having made the 11,000-mile round trip for South Korea’s two internationals, Son Heung-min was among the Spurs players training for the first time at Tottenham’s new stadium on Thursday. There is little doubt that the 26-year-old will play some part in Sunday’s huge game at Anfield, but 90 minutes may well be a step too far for one of Mauricio Pochettino’s biggest attacking threats. Liverpool have no such trouble regarding Mohamed Salah, who was given permission to miss Egypt’s matches in order to get some rest before the season’s run-in. “He always played pretty much all games, everywhere for country, for us and all that stuff, so it was really important [he could have a break]”, explained Jürgen Klopp. In a game of small margins, home advantage and a fresh Salah versus a jet-lagged Son should be an advantage for the hosts. MB

5) A potential six-pointer on the south coast
Simply put, it is a massive game at the bottom of the table on Saturday between 15th-placed Brighton and 16th-placed Southampton. Brighton are in a much stronger position – three points ahead of Saints, five clear of the bottom three, and with a game or two in hand over the teams around them, owing to their FA Cup run. But their run-in is perilous: Chris Hughton’s side will play Chelsea, Wolves, Tottenham, Arsenal and Manchester City before the season’s end. Southampton have not kicked a ball in earnest in nearly three weeks, and it is crucial for Brighton to capitalise on any rustiness and put some distance between them and the bottom three. MB

6) Hammers far from nailed on for seventh
Take away the top six and a fascinating five-way tussle for the title would be developing. It says much about the failures of the Premier League era that the race for seventh is actually a thing, but for those involved, the best of them a distant 13 points behind sixth-placed Chelsea, an intense mini-league has developed. Four points separate Wolves, Watford, West Ham, Leicester and Everton, with only four games left that pit two of those teams against each other. West Ham will play in three of them, the first on Saturday evening against Everton. They may be seventh-placed kingmakers, but their chances of being crowned kings seem remote. With another three of their remaining matches coming away at top-six sides, their room for manoeuvre is diminishing rapidly. It has been a season of inconsistency salvaged by a midwinter run of six wins in nine league games in December and January. It may be that their chances of a strong top-half finish, of being able to eye the final table with satisfaction, will be fatally undermined should they fail to win here. SB

Gonzalo Higuaín has not set the Premier League alight since his January loan move and with Chelsea’s imminent transfer ban, his future remains uncertain. But the truth is that the Argentinian has been an important goal threat: three goals in seven league appearances is not to be sniffed at. Only Mohamed Salah has taken more shots in that time and his 10 chances created ranks him in the top five Premier League forwards. With Olivier Giroud’s goalscoring exploits over the international break, there will be a lot of pressure for the Frenchman to make his first league start of the year at Cardiff but do not be surprised if Maurizio Sarri instead opts for the well-rested Argentinian, who has announced his retirement from international duty to focus on Chelsea. MB

8) Nuno to unleash Wolves or shuffle his pack?
At what point does Nuno Espírito Santo start resting players for next Sunday’s FA Cup semi-final? If this seems a little cautious, it is worth bearing in mind that the game against Watford at Wembley is arguably the club’s biggest since the 2003 Championship play-off final. All 33,000 allocated tickets have been sold, and it is that match, not this weekend’s trip to Burnley, that is the talk of the town. With just three days before Tuesday’s league game against Manchester United, Nuno must choose between the risk of injury or fatigue and the threat of his best players losing their match sharpness. Ask most Wolves fans and all they will care about is the FA Cup, but league form still matters. Should Manchester City win the Cup, the team that finishes seventh will qualify for next year’s Europa League qualifying round. Should Nuno stick or twist? MB

The battle for seventh is heating up and Leicester are facing their bogey team, but Brendan Rodgers doesn’t look worried. Photograph: Plumb Images/Leicester City via Getty Images

While they may only have beaten Huddersfield, Bournemouth’s most recent win on the road did at least end a diabolical run of nine consecutive Premier League away defeats, during which they conceded at least two goals per game. While they are in little or no danger of getting relegated, this hideous form on their travels must be a source of frustration for Eddie Howe. Bournemouth are unbeaten in seven Premier League games against this weekend’s opponents, Leicester, drawing five and winning two over the past four seasons. They ran out comfortable 4-2 winners in the corresponding fixture at the Vitality Stadium, but are unlikely to have it all their own way now Brendan Rodgers is in charge. With Harry Maguire suspended, Wes Morgan looks likely to start, although if Caglar Soyuncu, linked with a summer move back to Turkey, is to have a future at Leicester, this weekend seems as good a time as any for Rodgers to give him a runout. BG

10) Emery sweats on Xhaka fitness
Arsenal fans will have to wait until Monday to see their team play against Newcastle, but it will at least give Granit Xhaka the best chance of recovering from the thigh injury he suffered on international duty. The 26-year-old, who scored a long-range screamer for Switzerland against Denmark (just as he did against Newcastle earlier this season) has become a pivotal player for Unai Emery – Jorginho is the only midfielder to average more passes in the league this season. With Lucas Torreira still suspended, Emery will be desperate to have him fit for Monday night. MB