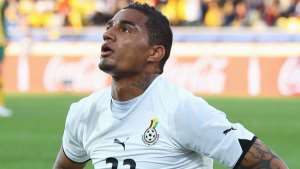 Coach Kwesi Appiah has insisted that Kevin Prince Boateng must apologize to the nation for the debacle of Brazil or he should forget about Black Stars return.

After completing his move to Barcelona from Sassuolo in January on a loan deal, many have called on Kwesi Appiah to include the 30-year-old in his squad for the 2019 Africa Cup of Nations.

However, Coach Kwesi Appiah is demanding an apology to invite the 32-year old.

“This issue has got to do with the white paper of the Dzamefe Commission," he said. “They were asked to apologize to the nation before they can be invited to the national team," Appiah added.

“I have said that he is a good player because when I took over he was playing for Sassuolo.

“I have also said that if he takes the step to apologize I will have the opportunity to invite him.

“Then he can play for all Ghanaians to assess him to see if he can help us or not.

“If this isn’t done earlier and we finish playing all our games before the Afcon then it will be very difficult to give him a call-up,” he told journalists after Ghana’s international firmly with Mauritania.

Muntari has apologized to the country and Kwesi Appiah.

However, Boateng is yet to apologize to the country.