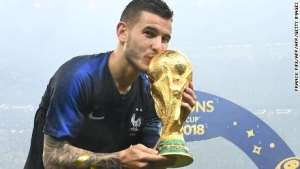 German champions Bayern Munich have confirmed that they have agreed a deal with Atletico Madrid to sign defender Lucas Hernandez.

The 23-year-old will join the club on July 1 and will sign a five-year contract.

In a press release, the German champions confirmed that the transfer fee paid to Atletico Madrid is Hernandez’s €80 million release clause.

World Cup winner Lucas told the club’s website "Today is a very important day in my football career. Bayern Munich is one of the best clubs in Europe and the world.

"I would like to thank Atletico, the management, the coaches, my team-mates and the fans for a wonderful twelve years. Atletico will always be part of me. Now I'm happy that I'm taking the next step at Bayern. "

The defender joined Atletico as a youth and came up through the club’s academy alongside brother Theo, who now plays for Real Madrid.

"Lucas can be used both in central defense and on the left of defense. In addition, Lucas will continue our tradition of outstanding French players and strengthen our team. "

Bayern also confirmed that their medical tests had revealed some minor damage to Lucas’ right knee which will be operated on to ensure he is fit for the new season.

"In our sports medical examination, we have found damage to the inner ligament of the right knee, which must be repaired surgically," said Dr Hans-Wilhelm Müller-Wohlfahrt, club doctor of FC Bayern Munich.

"In my experience, Lucas Hernández will be available to FC Bayern for Bundesliga start 2019/20."