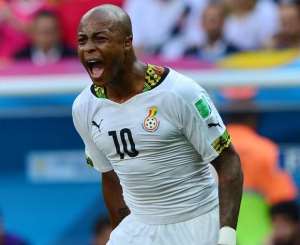 Deputy Captain for the Black Stars, Andre Dede Ayew has stressed that 24 countries competing at this year’s Africa Cup of Nations (AFCON) make it even more difficult to win the trophy.

A CAF Executive Committee, following a two-day football symposium held in Morocco’s capital Rabat last year, adopted a resolution to expand the AFCON from 16 to 24 teams, with the new format set to be effected during the 2019 edition.

After winning Group F to book a spot in the prestigious competition, the stakes are even higher than ever with the West African country determined to win Gold for the first time in over 3 decades.

Speaking in a post-match interview following a 3-1 win over Mauritania on Tuesday, 26th March 2019, Andre Ayew indicated that after representing Ghana at 5 different AFCON tournament, he is convinced this year’s edition is going to be much tougher.

“With my experience, I have been to 5 African Cups and I know how difficult it is so we need to take each game one at a time and not rush into conclusions. Now there are 24 teams which makes it even more difficult”.

“We have now a round 8 before you even go to the straight to the quarterfinals so we just have to prepare ourselves and I believe we have the squad to the end of the tournament. That I have no doubt and with the support and prayers from all Ghanaians I believe that everything can be very possible”, the u-20 world cup winner said.

He is however confident the Black Stars have the players needed to go to the tournament, make an impact and challenge the best of Africa to win the ultimate prize.

“We are in a period where as you said 37 years without the trophy. There are a lot of times that we deserved to win the trophy. I think we had won it in 2010 and in 2015 we wouldn’t have stolen it”.

“But it is football and we cannot say what is going to happen but what we can say is that we have the squad, we have the players and we have the staff to go to the end of the tournament”, Ayew said.

The 2019 AFCON which will be hosted by record holders Egypt will start on June 7 and end on June 30.