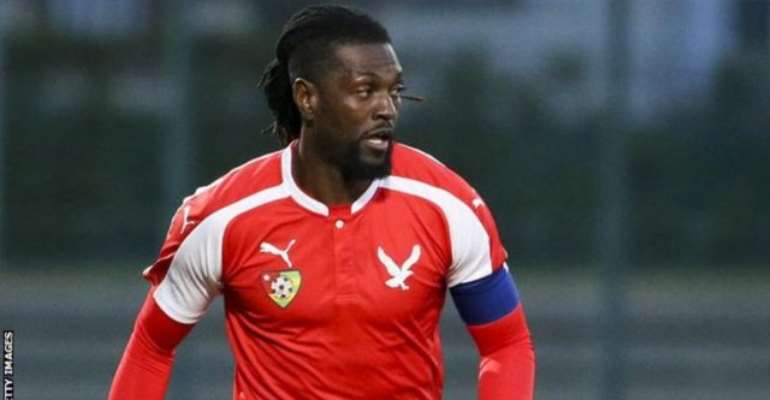 Striker Emmanuel Adebayor has admitted he is now considering his international future after Togo failed to qualify for the 2019 Africa Cup of Nations.

The 35-year-old scored on Sunday as Togo lost 2-1 in Benin to finish bottom of Group D.

After the match, he told reporters he will return to his Turkish club Istanbul Basaksehir to think about his future.

"I'll think about what the near future has in store for me," he said.

"I will make sure to keep in mind today's nice moments and if this is the end of all then so be it.

"l started playing for the national team in 2000 and we are now in 2019. There have been some ups and downs - there were some regrets as well as some unforgettable moments."

He added he has kept his shirt from Sunday's match in case it proves to be his last match to fulfil a promise he made his daughter.

"The most important thing it is that l have kept the jersey and socks because l promised my eight-year-old daughter that the last shirt l wear for the national team and my club will be for her," he explained.

"She has already sent me a message asking - "Daddy where is my Jersey?" and l have told her that l have already kept it here.

"Now there is no need to talk about the end of my career but we should rather talk about Togo's defeat."

He reflected on a club career that has seen him play for clubs of the stature of Monaco, Arsenal, Manchester City, Tottenham Hotspur and Real Madrid.

"I used to train once or twice a day when I was young now that I am getting older I realise that it is only through hard work training that you can succeed," he said.

"I was lucky to play alongside players like Cristiano Ronaldo, Thierry Henry, Denis Bergkamp and Sol Campbell and they have all taught me that in football that if you want to last in football it is only through training.

"It's true that before this game (against Benin) some Togolese said that I have become too old.

"But if I am still playing for a Turkish club where I am among the better-paid players, it is because I have a quality and I also contribute to play for that club.

"Now l think that l have to go back home and remember all the nice memories and fly quietly with all this to Istanbul."

Adebayor has announced his retirement several times in the past most notably in 2010 in the wake of an attack on the Togo team bus just before the Africa Cup of Nations in Angola.

His international career includes playing at the 2006 World Cup in Germany as well as the Nations Cups that same year and the finals in 2002, 2013 and 2017.