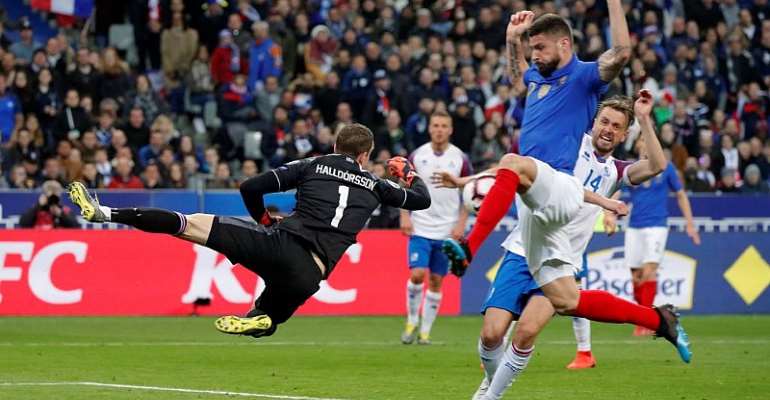 Kylian Mbappe scored one goal and set up two more as Olivier Giroud scored a record 35th international goal in France's 4-0 waltz past Iceland 4-0 at the Stade de France on Monday night. It was a second victory for Didier Deschamps' men in their Euro 2020 qualifying campaign.

France, with six points, lead Group H on goal difference ahead of Turkey.

Samuel Umtiti's goal after 11 minutes started the rout. He headed Mbappé's cross from the left past a flat-footed Hannes Thor Halldorsson in the Iceland goal.

In the second-half, though, Giroud did get the ball into the net. He prodded home after Halldorsson failed to collect Benjam Pavard's cross.

Giroud's strike moved him into third place on the all-time list of France scorers. The much maligned Chelsea striker eclipsed David Trezeguet's haul and trails only Michel Platini, on 41, and Thierry Henry, on 51.

Mbappé added France's third on 78 minutes after latching onto Antoine Griezmann's through ball and the Paris Saint-Germain striker eturned the favour six minutes later with a neat backheel that sent Griezmann through for his 28th goal since his international debut in 2014.

"I'm pleased with such an achievement," said Giroud of his rise on the scoring charts. "I'm extremely proud because Trezeguet was a player I really liked and he was a brilliant centre- forward.

"Hopefully I can continue and get to Platini's mark."