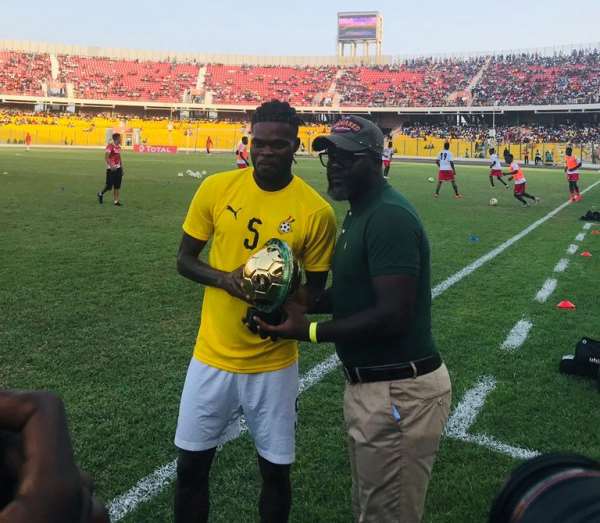 Ghana's Thomas Teye Partey has finally been presented with his award as a member of the 2018 Fifpro Africa Best XI almost three months after the award was announced.

Recipients were announced at the 2018 CAF Awards Night in Dakar, Senegal this January, but Partey was not in attendance to receive his but he received it in a more memorable way -- in front of the teeming fans of the Black Stars, at the Accra Stadium.

Partey received his award on Saturday, just minutes before Ghana played Kenya the Accra Stadium on Saturday in the final 2019 Africa Cup of Nations (AFCON) qualifiers.

The new member of Ghana's Normalisation Committee and former Ghana and Bayern Munich defender, Samuel Osei Kuffour, presented the award on behalf of the Professional Footballers Association of Ghana (PFAG)- the local chapter for Fifpro.

The Atletico Madrid midfielder, a man of few words, expressed his gratitude for the honour done him and said it was a motivation to work harder for more success.

The 25-year-old who featured the entire duration for Ghana against Kenya, had a spectacular season in 2018, helping his club to win the Europa League Cup and the UEFA Super Cup.

The 2018 Fifpro Africa Best XI was dominated by players from the English Premier League.