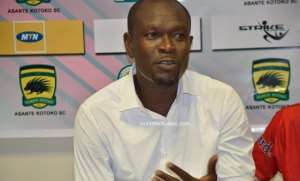 Former coach of Asante Kotoko, Malik Jabril has called on the management of the club to maintain CK Akonnor as their head coach despite their elimination from the CAF Confederation Cup.

The Porcupine Warriors were eliminated from the group stage of the CAF Confederations Cup after 2:1 defeat to Zesco United at Levy Mwanawasa Stadium in Ndola on Sunday.

Jesse Were and Kondwani Mtonga cancelled out Stephen Nyarko’s opener in first fifteen minutes of the second half.

The result was not enough for Kotoko to finish in the top two and qualify to the quarterfinals, something that coach Charles Akonnor rued.

But, according to Jabril, the management of the club should stay behind the coach because he has passed the test given him despite the limited time to had to prepare the team for the African Campaign.

"There was no understanding within the Defence so, the Management and the Technical Team should tackle the Defensive problems because it caused the team from the start of the Competition."

"They also need to reinforce the attacking department within the team and also strengthen the midfield to make the team very strong in future."