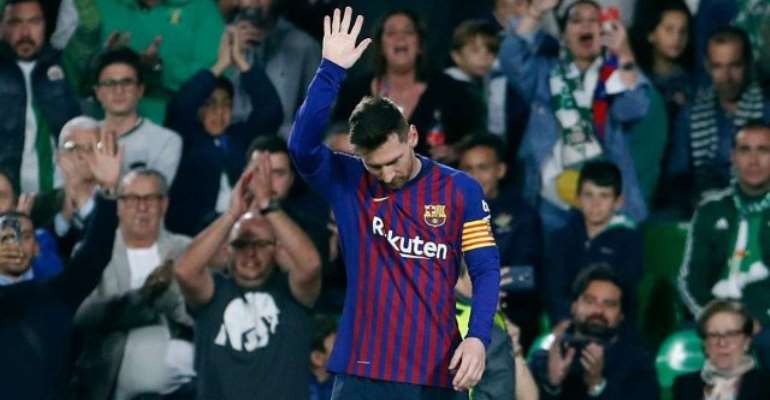 Lionel Messi was given a standing ovation by Real Betis supporters after scoring his 33rd La Liga hat trick in Barcelona's 4-1 win at the Benito Villamarin on Sunday.

Messi opened the scoring with a free kick and added the second before the break after a brilliant Luis Suarez assist. He completed his treble late on with an exquisite chip after Suarez and Loren Moron had exchanged goals.

The third Messi strike, which killed off any late hopes of a Betis comeback, drew an ovation from the home supporters which the Argentine international says he has never previously experienced.

"I don't ever remember a night like this [being applauded by rival supporters]," he told Movistar after taking his goal tally for the season in all competitions to 39.

"I'm really grateful for the way the fans responded. I honestly don't remember an ovation like that [from rival fans]."

Barca coach Ernesto Valverde says Messi's treatment from the Betis fans is deserved recognition for everything he does on a football pitch.

"With Messi [in your side], everything is easier," he said in his postgame news conference. "Leo's performance was extraordinary. The whole stadium applauded him. We're fortunate to be living at a time when he's playing football.

"Opponents also enjoy what he does despite the fact he scores against them. And the [Betis] supporters recognised that. Even though rival fans suffer at the hands of him, they recognise the player he is."

Valverde changed Barca's shape for the game against Betis, dropping Philippe Coutinho and playing a midfield four after losing to Quique Setien's side at Camp Nou earlier in the season.

Lionel Messi said he can't remember ever receiving a standing ovation from rival fans as he did at Real Betis on Sunday.

Messi felt the new formation was one of the keys to Barca's comfortable win as the league leaders moved 10 points clear of Atletico Madrid, who lost at Athletic Bilbao on Saturday.

"It was important to take advantage of a really big opportunity after Atletico's result," said Messi forward, who moved on to 477 career wins in a Barca shirt, overtaking Xavi as the player to have recorded the most victories at the club.

"We couldn't slip up today. Betis are a side that treat the ball well. But we didn't suffer at all. We were really well-organised. Valverde read the game well and tactically we were perfect."

Barca's win was tainted by a late injury to Suarez, however. The Uruguay international forward, who scored a stunning solo goal, was forced off late on with an ankle sprain.

The Catalan club have confirmed he will undergo further tests on Monday to determine the severity of the injury, but he will not join up with Uruguay during the international break this week.