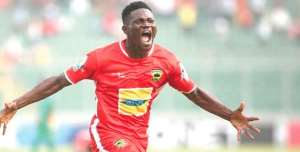 Former Black Stars player, Augustine Arhinful, says the inclusion of three local-based players in the senior national team would serve as a motivation to other home-based stars.

Arhinful, who played for Borussia Dortmund during his career days, lauded the initiative by Black Stars coach, Kwesi Appiah, to hand three Asante Kotoko players call-ups into the side ahead of their final Africa Cup of Nations (AFCON) qualifier against Kenya in Accra on March 23.

Coach Appiah invited Kotoko trio of Felix Annan, Kwame Bonsu and Amos Frimpong into a 24-man squad to play against the Kenyans as they look to end their qualification in style at the Accra Sports Stadium.

In an interview with the Daily Graphic, Arhinful who also played for Ankaragücü in Turkish Super Lig, Grasshoppers in Switzerland, União Desportiva de Leiria and Boavista in Portugal, Venezia in Italy, entreated the three players to impress in order to put themselves in pole position for regular invitation into the team.

He expressed the hope that the players would impress when given the chance, looking at their performances for the Porcupine Warriors in the ongoing CAF Confederation Cup.

"It is a good thing for the local-based players to be given the nod in the Black Stars to prove what they can offer and I believe it will serve as a motivation for others in playing here.

"This is a good initiative and I want to praise coach Kwesi Appiah for the opportunity he has given to these three players, especially with what they are doing with Kotoko in the African campaign," Arhinful added.

The Stars begin their preparations for Saturday’s game at the Accra Stadium today, and Coach Appiah is expected to have the full complement of the 24 players he has invited for this final game against Kenya by tomorrow, as world football goes on an international break for national assignments.

In a rare double header involving two national teams at the Accra Stadium, the Stars game will be preceded by another qualifier involving the national U-23 team, Black Meteors and Gabon.