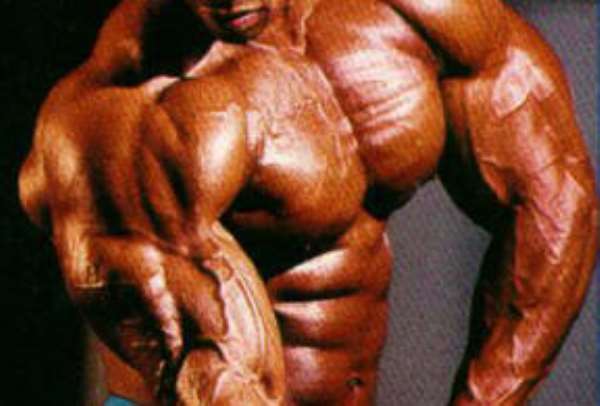 Accra, Dec. 18, GNA - A well-crafted chorography, a fine sculpted thighs and a little bit of luck powered 27-year-old Trader, Sylvester Dennis to beat a group of highly-ranked bodybuilders to annex the maiden "2005 MuscleMania West Africa Contest" at the Accra International Conference Centre on the early hours of Sunday.

He made it double for his family after his senior brother Francis Sabah had won the 2002 "Mr Ghana Contest."

But it was a sad day for current Mr Ghana champion, Christ Antoh (King Sabato) who was highly favoured by the teeming fans to win the competition.

Some fans could not help but leave the auditorium after Sabato stumble at the group stages; but he put up a brave face before the cameras to exhibit a high sense of professionalism.

He told the GNA Sports that the results a was a heart breaking one, having suspended all conjugal rights for the past six month and also switched off his phones to avoid any disturbances. In the process, his girlfriend, a student of the University of Ghana had to leave him for luck of attention.

More than 50 contestants from the sub-region were grouped into lightweight, middleweight, and heavyweights divisions and only the winners in each category proceeded to the final phase of the competition.

While eventual winner, Dennis and second runner up Tiana George from La Cote D'Ivoire were easy winners in the heavyweight and lightweight divisions, the story was different in the middleweight category where all the favourites were grouped.

Sabato, his runner-up at last year's Mr Ghana competition, Arnold Aryee and Kenya's champion Paul Mwangale plus some other potentials were all paired in the middleweight category- and only one was to progress from the group.

After the compulsory symmetry, muscle mass, condition and posing presentations, the Kenyan's height and huge thighs scaled over Sabato; and that shattered the dream of the Maximum Gym Instructor from ever representing the sub-region at the World championship. Perhaps, Sabato is not destined to visit the US for now, because even when he was declared champion at the 2004 Mr Ghana contest, he was bizarrely side-stepped for the third place person Mustapha Richardson to represent the country, although the gentleman was refused the UK visa. Dennis took home a trophy, three million cedis, a ticket by North American Airlines plus 500 US dollars spending money to participate at the World events.

Two internationally acclaimed judges were flown into the country and were supported by a Ghanaian veteran broadcaster, Nii Lantey Vanderpuje to give unblemished judgement. The programme was spiced with a model contest and lives musical performances by some of the nation's hip-life singers including Slim Buster.

The show was sponsored by a host of organisations including Maximum Gym at Dansoman, North America Airlines, Slok Air and Kingdom Herbal.