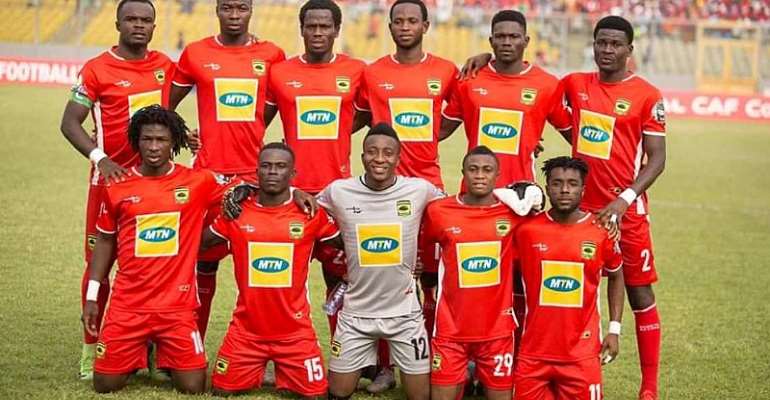 A resilient Kumasi Asante Kotoko showed character today to fight back and draw 1-1 with Sudanese power house Al Hilal Omdurman in the CAF Confederations Cup in a match played at the Baba Yara Sports Stadium.

With the group phase of the competition nearing its climax, the two teams were hoping to grab all three points today to enhance their chances of progression to the next stage. They however had to settle for the draw and the Ghanaian giants will obviously be the most disappointed side.

Kotoko despite enjoying most of the possession in the first half, struggled to create enough clear cut chances for their forward line to pounce on and they were unlucky to convert the few opportunities that came their way.

The visitors on the other hand forced some decent saves from Felix Anan as they pushed on a number of occasions to find an equalizer. They were rewarded for their efforts on the 33rd minute when Walid Hamid connected to a sweet cross and powered it home for the opener.

The Porcupine Warriors after the break played with more urgency and intention to get back on level terms in order to have any chance of winning the match. After several knocks on the defensive wall of Al Hilal, the Kumasi based side finally got the breakthrough courtesy a header from danger man Sogne Yacouba. The goal came too late and shortly after, the referee blew his whistle to bring proceedings to an end.

Nkana Fc currently top the group following their 3-0 thumping of Zesco United earlier today. The win means they have 9 points from 5 matches and a goal difference of plus 1. Al Hilal follows in second with 8 points whiles the Kotoko sits 3rd on the log with 7 points. It is fair to say that all 3 teams have a great chance of making it out of the group pending the results from the final round of matches.

In the last round of group matches to be played later this month, Kotoko will travel to Zambia to play Zesco United. Al Hilal Omdurman will also welcome Nkana Fc in a game which will potentially send one of the sides to the next round of the competition.

With the current shape of the group table, Kotoko will need to win their last match convincingly and also hope that result from the other group game favors them.