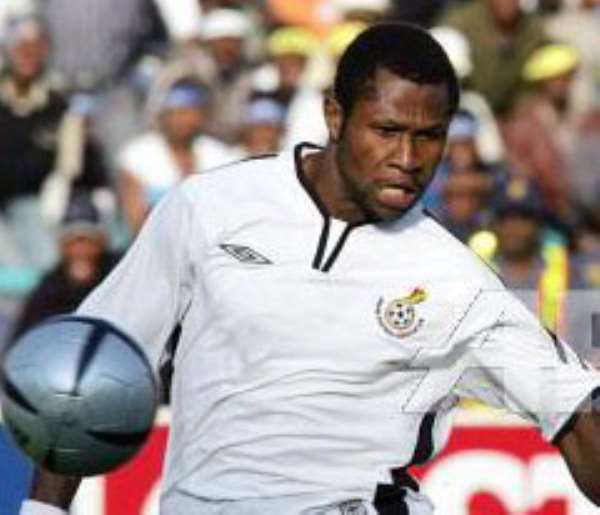 Accra, Dec. 17, GNA - Issah Ahmed, skipper of Kumasi Asante Kotoko and a member of the senior national team, the Black Stars has been adjudged the Best Player of the season by the Professional League Board (PLB). The award, the most prestigious among the 12 categories, saw the skipper of the reds, going past Eric Gawu of King Faisal and 2005 Goal-king Prince Tagoe of Accra Hearts of Oak to take possession of the enviable award.

Defender Ahmed, took home a trophy, certificate, an undisclosed amount of money and he is to spend two nights at the Golden Tulip Hotel as his prize. Having enjoyed a pleasant season, by leading his team to win the 2005 Premiership, Ahmed, crowned it with an entry into the national team and played consistently during the 2006 World Cup and Nations Cup qualifiers, which ensured Ghana's first ever-historic qualification to the World Cup. His side Kumasi Asante Kotoko was adjudged the Club of the Season, in a category, which was also contested by Accra Hearts of Oak and King Faisal Club.

Kotoko received a cheque for 50 million cedis for winning the league, with Hearts and Faisal taking home 30 and 20 million cedis for placing second and third respectively. Gomoa Feteh Feyenoord, were the dominant side on the night sweeping four awards. New sensation, goalkeeper Philemon McCarthy, won the Best Goalkeeper and the Discovery of the Season Awards. The young goalie scale over Laud Quartey of Real Sportive and Kotei Blankson of Liberty Professionals to win his first award and stood tall among the likes of Kwame Obeng Darko of Liberty Professionals and Alex Asamoah formerly of Berekum Arsenals and now with Obuasi Ashgold to pick his second award.

McCarthy, for his prize will enjoy a round trip to the United Kingdom as well as spend two nights at the Golden Tulip Hotel as his prizes for the two awards. Danladi Sheriff shrugged off the challenge from two experienced defenders Alhassan Illiasu and Issah Ahmed to win the Defender of the Year Award. He took home a miniature trophy and a certificate Coach Francis Oti-Akenten of King Faisal Football Club was adjudged Coach of the Season having competed for honours with Emmanuel Quarshie of Berekum Arsenals and Sulley Mohamed of Real Sportive. Coach Oti Akenten has been offered One Million Cedis, worth of shopping from Mawuli Okudjeto Designs, a fashion company in Accra and a miniature trophy as his prize.

Felix Ansong of Liberty Professionals picked up the Chairman of the Year Award from the jaws of Tommy Okine of Accra Hearts of Oak and Isaac Banson of Tema Real Sportive and received three million cedis worth of shopping from ORCA Ghana Limited and a trophy. Okwawu United, had their Nkawkaw Park declared as the Best Behaved League Centre, while the club itself won the Fair Play Award. The knights of the whistle were not left as Tema based J.K Mortey won the Referee of the Season Award and had 500 000 cedis worth of shopping from Jokers Night Club.