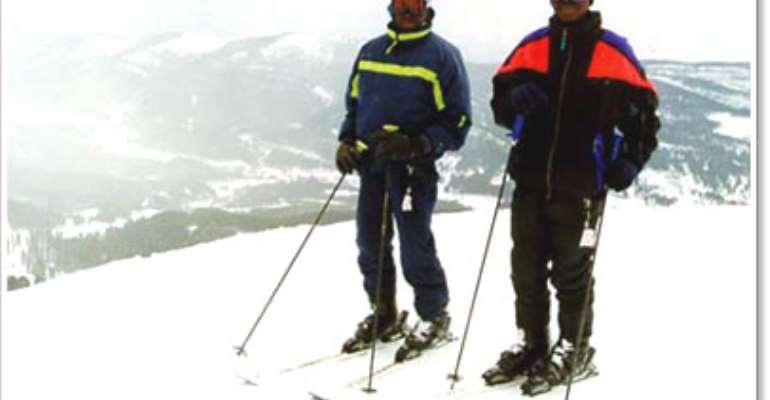 A 29-YEAR old Ghanaian skier, Kwame Nkrumah-Acheampong, is on the brink of creating history as the first black African to ever compete in skiing event at the 2006 Winter Olympics in Turin, Italy in February.

In a telephone interview with The Statesman early this week, the skier, dubbed, “Snow Leopard”, said: “My mission is to send a message across to fellow Africans that skiing is a global sport for any interested person, from recreational to Olympics”.

Nkrumah-Acheampong is currently traveling around the world, collecting qualifying points in major skiing competitions for the Downhill Alpine event. “It may not be long for Ghana to be presented with a world skiing championship winning medals”, he assured.

On how he got involved with the sport, Snow Leopard said he became fascinated with skiing whilst working at the Snozone Xcape Indoor Ski Centre in England for about two years.

Said he: “I was spotted by my coaches who felt I had the desire to develop my natural talent and, therefore, entered my first competition and finished in the top 10 out of 60 experienced ski racers.

“It was at this point I had the desire to compete at a higher level. I spoke to my coach and enquired about whether this will be possible. He said it was, and jokingly said 'why not go all the way and compete in the Winter Olympics'. That's when the journey to my Olympic dream began”.

In his first official FIS race in Val Thorens, the highest resort in the French Alps, Nkrumah-Acheampong managed a fantastic result against very experienced racers from Germany, France, Austria and other superpower winter sports nations. Before the race, he had accumulated 1000 FIS points but fell short of 140 FIS points to qualify for the 2006 Winter Olympics. “This is a big challenge but I know I can make it since I've so far earned 614.65 FIS points towards qualification”, stressed.

The Ghanaian skier said he had been assured by a UK-based business company, Easy Jet, for a sponsorship package through his skiing contests around the world to enable him qualify for the Turin Winter Olympics next year.

“I'm, therefore, preparing for the Dizin resort in Iran for FIS qualification races, scheduled for February 24. I'll also take the opportunity to enter six FIS races and will have a great chance to gain valuable points”, he added. He has, therefore, appealed for support from around world. “Nothing is too little to help me achieve my aim as the first Ghanaian to represent my nation”, he said.

“Each of my challengers has a budget of around £150,000 a year, and every team has about four coaches. Kwame doesn't even have a coach! He can't even afford to train so he has to just ski around and ask to join in with other clubs every day”, he bemoans Born in Glasgow, Scotland, Nkrumah-Acheampong spent most of his early years travelling with his father around the world. He is a product of the University of Ghana, Legon, where he studied Travel and Tourism and holds Masters degree in Travel and Tourism Management from a UK university.

Nkrumah-Acheampong has, therefore, appealed to philanthropists and corporate bodies for sponsorship to enable him achieve his Winter Olympics dream. “I still need a car or campervan in my bid to become the first black African downhill Olympian”, he says.

Interested persons and orgasnisations are requested to call: David on 07881 956746 or see www.ghanaskiteam.com.