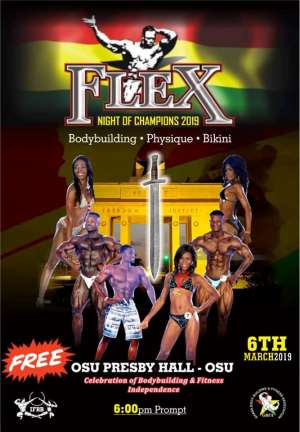 The Ghana BodyBuiding & Fitness Association (GBFA) is organizing series of events on the Independence Day of Ghana, March 6, 2019.

According to President Abdul Yartey, the programme starts at Dansoman Emmanuel Presby Church for a mass aerobics and physical training session, before they move to the Independence Square at Osu for a photo shoot out with stars and celebrities in the bodybuilding family.

In the evening on the same day, the programme shifts to the Osu Ebenezer Presby Hall for the climax show of body flexing.

Mr. Yartey said this programme is his first after he was re-elected for the third time and he has a package for the fans and well-wishers of Bodybuilding in Ghana.

He expressed that there would be Men’s Physique and Bikini show by top male and female bodybuilding models.

He hinted that the gates would be free because they want more people to get attracted to bodybuilding and be fitness conscious.

He commended the media who have promoted the Independence Day event and appealed for support and sponsorship from companies.

He noted that the sport is attractive in advanced countries and it is about time the government gives them support, because a Ghanaian, Adjah is the best body builder on the continent of Africa.

He also urged the Sports Writers Association of Ghana (SWAG) to consider their sport when chosing the best sportsmen and women for recognition and honours.

He said the Flex Night Of Champions Bodybuilding Overall Winner will take home a special sword and wants sports fans to come and see who will win the magnificent sword.