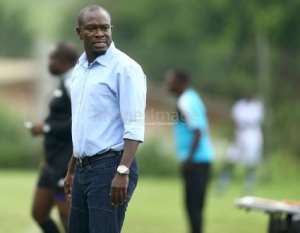 Asante Kotoko head coach Charles Kwablan Akunnor has explained his team’s defensive abilities after keeping a clean sheet in their 3-0 win over Nkana FC in the CAF Confederations Cup on Sunday.

Ahead of the game, C.K. Akunnor was bombarded with questions with regards to the shambolic defending by his defenders after the defense had conceded in all their group games so far.

C.K. Akunnor had to reshape his team by introducing new players with the hope of keeping his defense tight which later paid off for him.

“We are trying our best. Today we have won 3-0 and it’s important that we did so without conceding a goal.” Akunnor said during the post-match presser.

Kotoko who are now second in Group C will host Al Hilal at the Baba Yara Sports Stadium on 10th March.

Re-demarcate Aflao Lands - Togbui Fiti Over Encroachment Of ...
49 minutes ago

We Were Misled By False Social Media Information – Final Yea...
49 minutes ago