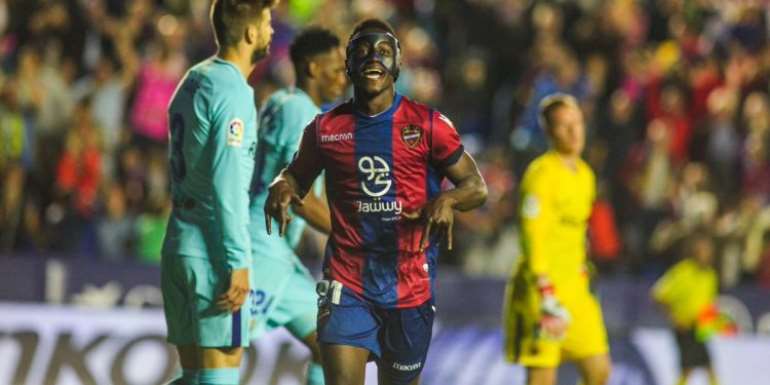 All too soon, Emmanuel Boateng’s time in the limelight has ended – even if only temporarily — with a move to the Chinese top-flight sealed and announced last week marking his departure from La Liga outfit Levante.

While it lasted, Boateng did have a swell time, a few players have enjoyed a more memorable 18 months at a middling European club than the Ghanaian.

His spell at the Ciutat de València yielded 48 games (less than half of those being starts) and just eight goals, but Boateng made his mark alright.

Four of those strikes came against Spain’s two biggest sides in his only full season — 2017/18 — including a memorable hat-trick right at the end that rubbished FC Barcelona’s quest to go an unprecedented league season unbeaten, sent shockwaves around the world and helped him to his first senior international appearances.

Boateng may have ended said campaign on a high, but he struggled in that which followed. The initial battle was one for fitness after he’d picked up an injury in pre-season, but it eventually became one for form, and Boateng didn’t quite win.

It didn’t help that the 22-year-old had to contend with a tough pecking order for a starting berth, but it’s probably worse than the opportunities he got produced a solitary goal.

And so when a good deal — reportedly the second-best Levante have received for a player — arrived from China’s Dalian Yifang (coached by German legend Bernd Schuster, a former Levante boss), club and player had few qualms parting.

The Chinese Super League — which has a new season starting March 1 — isn’t the world’s most spectacular, but it promises wealth and less intensity for Boateng who’d readily grab both. The route from Europe to China — since the days of Marco Polo — has been well-travelled and, in case Boateng pines for a return to the Old Continent someday (and he should, really), well, he wouldn’t be the first to make that trip either.

For now, though, the striker’s adventure in Spain — short and sweet, if not overly successful — is over; on to the next.