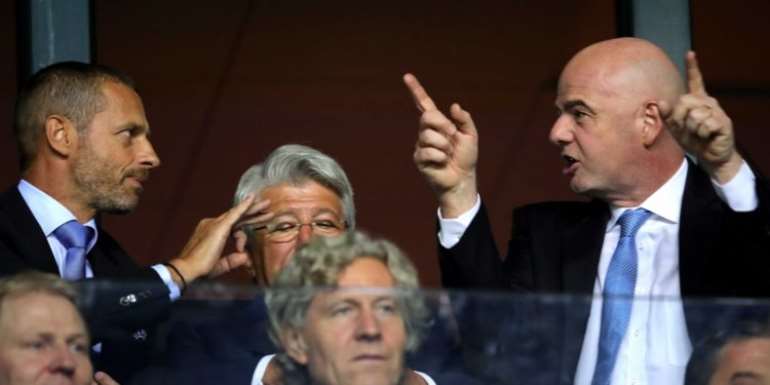 UEFA has fired a powerful warning shot across the bows of Gianni Infantino over his contentious competitions revamp but left FIFA’s president valuable room for compromise at a showdown meeting next month.

The world federation supremo angered Europe’s governing body last spring when he surprised FIFA Council with his revelation of a $25bn Saudi-underpinned proposal fronted by the Japanese investment conglomerate Softbank.

For Infantino his work on a revamped Club World Cup and an all-new global nations league had been confidential; critics considered it suspiciously secretive.

Aleksander Ceferin, president of UEFA which is fiercely protective of its pre-eminent Champions League, has insisted recently that he knew no details of the Softbank proposal.

This was surprising. Last December FIFA had reported a first meeting of a task force representing all its six confederations – including UEFA – “for analysing the possibility of establishing an overhauled FIFA Club World Cup, as well as a worldwide Nations League.”

A blunt statement said that UEFA and delegates from the European Club Association and the European Leagues “were of the unequivocal view that any decision on potential new competitions can only be made as part of an agreed framework for the international match calendar post-2024.”

In a further warning to Infantino not to hide anything or try to play off one sector against another, UEFA added: “All related sporting and commercial matters must be fully disclosed and discussed among professional football stakeholders beforehand.”

Interestingly, one member of the strategy council did not sign up: the international players’ union FIFPro.

The timing of the UEFA meeting and its conclusion was significant because a report from Infantino’s taskforce is due for review by FIFA Council in Miami on March 14-15. UEFA commands only eight of the 35 council members and other confederations have been supportive of Infantino’s proposals. However, they will be wary of upsetting Europe which generates more than 90pc of the game’s worldwide revenues.

One chink of light for compromise was UEFA’s indication that it might be willing to consider refined proposals beyond 2024.

Infantino had hoped to rush through approval for his new competitions at an emergency meeting of FIFA Council ahead of the World Cup in Russia last year. It never took place. Instead, he had to settle for a meeting with confederations delegates which agreed on the concept of a task force to study all the options.

European concerns grew after reports that, though FIFA would hold 51pc of a joint management company, it would hand over a majority of its broadcasting and digital rights.

Ceferin used the platform of a European Union policy debate to caution: “As long as I am UEFA president there will be no room for pursuing selfish endeavours or hiding behind false pretences. I cannot accept that some people who are blinded by the pursuit of profit are considering to sell the soul of football tournaments to nebulous private funds.

“Money does not rule – and the European sports model must be respected. Football is not for sale.”

In October FIFA Council formally set up the taskforce which held its first formal meeting in December under the chairmanship of joint deputy secretary-general Zvonimir Boban.

The former Croatia captain was clear about the advantages in a question-and-answer session last month at AIPS Congress in Lausanne.

Boban said: “There are many commercial organisations which organise matches for European clubs in the summer. So no-one should object to the Club World Cup in the summer because it will not make money for these businesses but for the clubs and for the game of football.”

As for a global nations league, Boban said that the value of the concept had been demonstrated by UEFA’s own inaugural event. He envisaged each confederation organising its own nations league topped off by a short title-winning tournament.

Ceferin was not to be soft-talked. He told this month’s UEFA Congress, with Infantino in the audience: “By telling FIFA that we disagree with their current proposals on the Global Nations League and the Club World Cup, we show them respect and we show respect to football, the game we love and the game we must protect.

“We sincerely hope that FIFA will also show us respect by listening to our views … UEFA and European football deserve to be respected.”

Infantino was elected as FFA president in 2016 on a manifesto of World Cup expansion and a massive increase in development funding. He stands for re-election in June but without ballot-day pressure: the deadline for nominations has passed. He is the only candidate.

That happy coincidence offers Infantino and UEFA a diplomatic breathing space in which to avert a schism – to everyone’s ultimate profit.