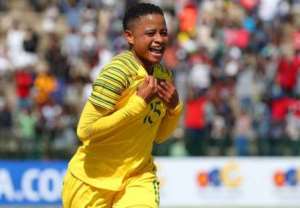 Global sports brand, Nike, has signed South Africa and Canberra United star Refiloe Jane in a deal that will see the talented player represent the Nike brand, both on and off the pitch.

Jane has performed admirably well for Canberra United since signing for the top Australian outfit in August.

Jane, 26, said in an interview that she was over the moon to have caught the attention of a brand that she had long admired.

“I remember how growing up I used to envy how other kids were privileged to be wearing Nike. Nike was all I saw growing up, and not even once did my parents have money to buy me Nike or any other brand.”

“Talent on its own is not enough in football. Support plays a big role to boost performance. Giving my best on and off the field can only be a fitting thank you to Nike for their support.

She continued: “Nike has been a big supporter of women in sport over the years and they have empowered women like Caster Semenya and Kgothatso Montjane. I feel honoured and privileged to be associated with a big brand like Nike who support women in sport.”

During the Total Women's Africa Cup of Nations, the South Africans were dealt a big blow ahead of the final after their deputy captain, Jane, was ruled out of the clash against Nigeria at the Accra Sports Stadium.

Jane, who had featured in all matches by the Banyana Banyana at the tournament, was recalled by her Australian club, Canberra United FC and she left Accra for Australia after helping South Africa reach the Women's AFCON final, as well as their maiden FIFA Women’s World Cup qualification.

She is currently pursuing a master’s degree programme in Sport Marketing at the Tshwane University of Technology.