Brazil Miss Out On Under-20 World Cup 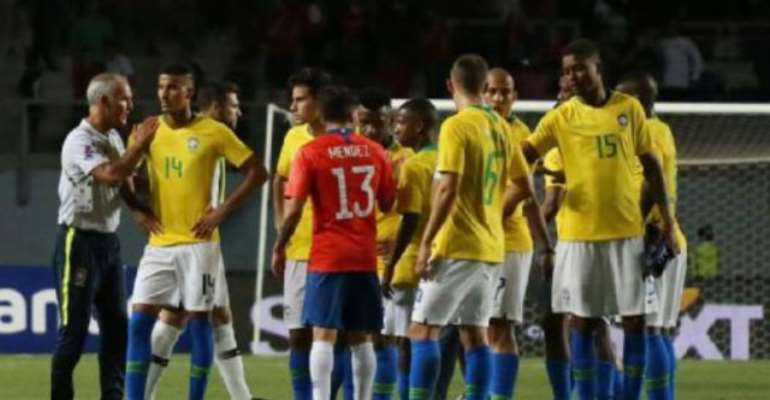 Brazil beat Argentina 1-0 on the final day of the South American under-20 championship on Sunday but the result was no good for either side as Ecuador pipped Argentina to the title with Brazil ending outside the qualifying spots for this year's World Cup.

Uruguay and Colombia will join Ecuador, who won their maiden title, and Argentina in the finals of the biennial event that kicks off in Poland in May.

Brazil, who have won the South American championship more than any other nation, scored only six goals in nine games and finished fifth in the six-team final group.

They will miss the under-20 World Cup for the third time in the last four.

Though Brazil have been without some top players in the tournament with Real Madrid not releasing Vinicius Junior and Bayern Munich denying permission to winger Paulinho, they have also been hindered by disorganisation.

They played few warmup games before the tournament compared to some of their opponents while there has been continuous changes at the coach's office.

Current coach Carlos Amadeu took over only a year ago and the chopping and changing meant that Brazil, unlike rivals Uruguay or Argentina, have had no consistent game plan or style, with each new manager bringing his own ideas.

"We feel that in recent years the youth teams have had a lot of different leaders, with lots of changes," Ney Franco , a former under-20 coach, told O Estado web site.

A lack of interest in the tournament was also evident in coverage with Brazilian media devoting more space to Neymar 's 27th birthday party than their youth team' defeat by Uruguay the same night.

The Brazilian Football Confederation has also provided no information on their website about the players who went to Chile other than their names.

The elimination might, however, not impact the players or the national team's future.

Barcelona's Malcom, Manchester United's Fred, Felipe Anderson of West Ham United and Everton striker Richarlison all played in disappointing campaigns in the past.

COVID-19: 3months Free Water For All Ghanaians Begins
46 minutes ago