Host And Wine Affair At Bogoso, As Lady Captain Lavished On Her Birthday 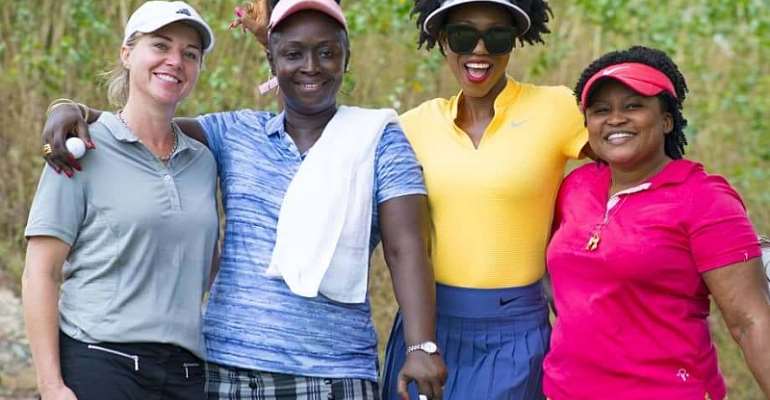 The maiden Lady Captain's prize at the Ankobra Golf and Country Club turned out “Host and Wine” as the affable Lady Captain of the club, Floria Hurtubise went on to capture the first spot in the Ladies Group A along with a lavish birthday bash.

After recording streaks of victories from several courses in the country from previous contests, the chances of her winning at her own event was arguably high.

However, with the likes of Constance Awuni; Ghana's No. 1 lady golfer and the big hitter Leticia Amponsah-Mensah, it remained foggy how the eventual scores would turn out.

When the curtains finally rolled down, Floria proved her dominance in the game for a defining win that perhaps delivered her the most deserving birthday gift. As host, she gave away her prize but kept the trophy.

Leticia Amponsah Mensah, from the Celebrity Golf Club, came third on a net score of 81 off handicap 10.

In the Ladies Group B, the queen of golf, Vastie Amoafo-Yeboah, firmly believed in her ability to mesmerize the course with sheer brilliance for a refreshing victory and eventually shot to a net score of 75 off handicap 22.

Vastie, a golfer from the premier Achimota Golf Club, later made an Instagram post of her walking with incredible strides in her steps. She captioned it as, “Belief in Yourself so much that the world can't help but to believe in you too”.

It continued. “I believed I could be a good golfer, and Yes!! I made the cut”. In addition to her prize and trophy, the gorgeous Royal Senchi Resort offered her a two-night stay at their captivating resort.

Margaret Oduro, from the Royal Golf Club, Kumasi followed in the second place with a net score of 78 off handicap 22.

Bok Nam Kim's Hajia Zenabu recorded a net score of 79 off handicap 28 for a third-place finish.

Meanwhile, in the Men Group A, Kojo Kyei, from the Royal Golf Club took charge of the group to emerge the winner after returning a net score of 71 off handicap 4.

Kojo took home a stunning trophy and gifts as well as a 2-night stay at the serene Maaha Beach Resort as the overall winner in the Men category.

James Akwaboah from the Nsuta Golf Club was two-shot off the lead to finish in the second position on handicap 3.

Yaw Anarf, representing Tarkwa Golf Club rolled out a net score of 74 off 6 for the third place.

In the Men Group B, golfers from the Ankobra Golf and Country Club dominated the leaderboard from all angles as Craig Tando led the pack with a net score of 73 off 14.

Mercy Werner, from the Celebrity Golf Club, gracefully snatched the prizes for the Ladies Longest Drive and Nearest to the Pin.

In a lucky draw contest, Godwin Amoakohene won himself One-Night stay and breakfast at the Atlantic Hotel in Takoradi.

The Men Booby Prize went to Don Obilor while Gloria Amodzin took that of the Ladies.

The Lady Captain of the club amply demonstrated her generosity and thoughtfulness when she honoured the Vice President of the Ghana Golf Association, Mr. Lee Mensah for his consistent participation in all tournaments across the length and breadth of the country considering him being an elderly person.

Floria also honoured the representative of the Ghana Ladies Golf Union (GLGU), Margaret Oduro and some of the top 20 lady golfers on the GLGU ranking with elegantly personalized prizes.

After an eventful golf event with an exciting mix of results, the evening was crowned with an exquisite and expressive 30th birthday party celebration for Floria and her twin sister Florence.

The night turned out in amazing style with abundant of music, a flurry of drinks and sumptuous delicacies in an atmosphere of fun and warmth.

Johnny Walker supported the golf event with products and also presented some customized products for the Lady captain for her birthday.

Speaking to the TheGolfer Online, Lady Captain Floria Hurtubise was full of praise to her husband, Mr. Mike Hurtubise for his unflinching support and assistance during the preparations leading to the maiden Lady Captain's Prize tournament. 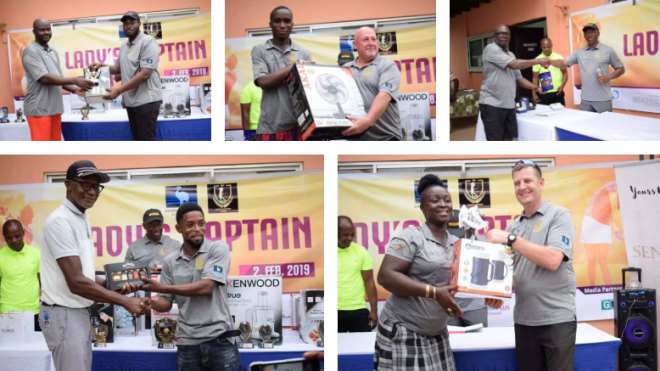