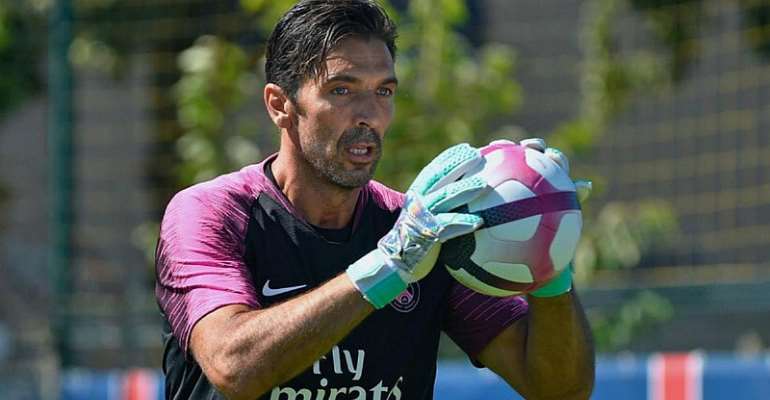 Goalkeeper Gianluigi Buffon said on Saturday that he wants "to stay another season" at Paris Saint-Germain.

The 41-year-old, who played 176 times for Italy and won the World Cup in 2006, arrived as a free agent from Juventus last summer on a one-year contract with an option for a second.

At PSG, he has split goalkeeping duties with Alphonse Areola, who was part of the France squad that won the World Cup last summer.

"If Alphonse and the club want it, I would stay another season here, but for the moment, it's important to stay focused on the objective, the match in Lyon, then Bordeaux and after that Manchester," Buffon said.

Runaway Ligue 1 leaders PSG visit third-placed Lyon on Sunday and take on Manchester United in the last 16 of the Champions League on February 12 and March 6.

"As to my contract for the next season, we have plenty of time to think about it," said Buffon, at a press conference he gave with Areola on Saturday.

'NOT COMPLETELY SATISFIED'
Meanwhile, coach Thomas Tuchel said on Saturday he was "not completely satisfied" with the club's dealings in the January transfer window but that he "wasn't angry."

Tuchel had asked for two players to increase his defensive options, but the club only landed one.

"Angry, no, no," the German said. "The winter transfer window is so complicated. Who wants to lose a player?

"There are very few possibilities in the winter transfer window. The challenge is putting together a team during the summer."

"If you need to do a lot of deals in the winter, you will probably be disappointed," Tuchel added.

At Christmas, he asked for "a second (Marco) Verratti and a second Marquinhos" but PSG only bought Argentine midfielder Leandro Paredes for an estimated 47 million euros ($54m) from Zenit Saint Petersburg, while Everton turned down PSG bids for Idrissa Gueye.

PSG have lost Neymar with injury until early April and midfielder Adrien Rabiot remains at the club after the transfer window but has expressed his desire to leave.

"If you ask if I'm satisfied with Paredes, I say clearly yes," Tuchel said. "He has the quality and personality to play for PSG," he said. "He has a good vision of the game. He can accelerate play. He can make a lot of passes."

Tuchel denied reports that his relationship with sporting director Antero Henrique had deteriorated.

"Our relationship during the transfer window is always very, very close, I have my opinion, he has his own," said the German. "We have to do the best for the club."