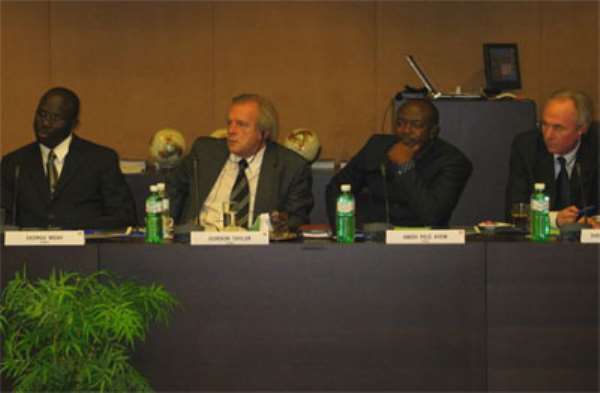 Some disturbing news emerged from the headquarters of football's world governing body, Fifa, yesterday ordering elections in Nigeria within 20 days.

The term of the Nigeria Football Association board, led by Ibrahim Galadima and voted in three years ago, expired yesterday.

But he has been reluctant to conduct fresh elections saying it would derail plans for the Super Eagles preparations for the Nations Cup in Egypt in two months' time.

Galadima's request to stay in power has not only been turned down by Fifa, but has brought with it a threat of a ban if this order is not adhered to.

Ghana finds itself in a similar position as insiders of the Switzerland-based organisation have confirmed both privately and publicly.

When Nyaho Tamkloe resigned as the chairman of the Ghana Football Association in May which prompted Fifa's intervention, it presented us with the opportunity to restructure our statutes, bring democracy to the organisation which has been largely unaccountable and to bring professionalism into the way football is run in the country.

Seven months on, Fifa's request to have our house in order by presenting news statutes and holding fresh election are yet to be adhered to, even after persistent warning from the world governing body.

Instead of concentrating on the task ahead, the division at the top of Ghana football has widened with those in power seemingly unwilling to give it up for fresh elections like Galadima. When I highlighted four years ago that the Executive Council of the GFA was and still is the bane of administration of Ghana Football, my appeal fell on stony ground. The Y.A. Ibrahim led organisation which has supervisory role over the chairman of the GFA and his board, but in reality has no place in the footballing world, presided over injustice against clubs and individuals, which resulted in the highest number of court cases against the FA.

Even against the rules of Fifa, several clubs braved the consequences and took the GFA to court, with the Tudu Mighty Jets case resulting in a humiliating defeat and a climb down by the FA. Like a dictatorship, individuals like Ben Koufie and Nyaho Tamakloe who questioned the legitimacy of the Executive Council were threatened with removal from office and as they got their way like Saddam Hussein in charge of Iraq, their grip on power grew tighter.

Now that the powers of the Executive Council has been outlawed under the new Fifa statutes with the FA president having total control like any footballing organisation, its members are now jostling for leadership of the GFA. Those who were good friends on the Executive Council have clashed, with the Chairman of Ghalca JY Appiah falling out with Alhaji Grunsah and Kofi Manu over rumours that YA Ibrahim who works with CEPS has been transferred to Bolgatanga. These differences have contributed to the delay in holding an open election for the GFA chairmanship.

Some supporters of the current GFA board led by Kwasi Nyantakyi have also argued that elections should be held after the World Cup. At any given opportunity, they rush forward with their next clutch of baleful forecasts if they are not allowed to stay in power until after the World Cup, our preparation for the Nations Cup and the mundial would be hampered.

But they are wrong because the well being of the Black Stars and all the national teams rests on the players and coaches. If Kwasi Nyantakyi has done a good job since the departure of Nyaho, voters will vote for him.

Wouldn't it be absurd if general elections were due in Ghana and the NPP government says it would postpone the elections because the proposed highway from Circle to Kumasi was yet to be completed? The Super Eagles are preparing for the Nations Cup in 60 days' time but Fifa has given them 20 days to put their house in order. We should be no different. Lets not forget that such stubbornness led to Nigeria's ban from international football which prevented them from playing at the 1996 Nations Cup in South Africa.

The longer it delays, the greater the suspicion will become that the current leadership of the GFA are unwilling to led democracy prevail. Those who are qualified and interested running for the chairmanship of the GFA should present their manifestoes to Congress.

The delay in having GFA chairmanship elections is like casting a huge stone into a deep and dangerous pool. The ripples will take a long time to reach the edge, and nobody can predict what the impact of Fifa's hammer would be when it descends on Ghana football.

Ibrahim Sannie is a Ghanaian sports journalist with the BBC World Service.