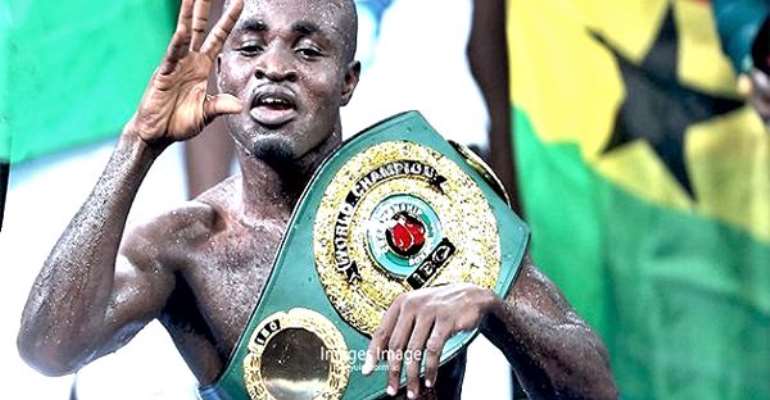 The IBF boss will be joined by Danny Leigh, the Vice-President for WBO Trans-Oceanic, and Peter King of the Lou DiBella Entertainment, the American promotional firm which recently signed on 30-year-old Tagoe.

Mr Peoples’ presence at the Bukom Boxing Arena is to decorate the winner with the IBF International title, according to the matchmaker, Mr Michael Tetteh.

The bout is expected to be Tagoe’s last ring appearance in Ghana before he relocates to the United States of America under the management of Lou DiBella Entertainment.

Tagoe (29-1-0) last fought in October in Accra when he defeated Namibian Paulus Moses to win the WBO Africa title.

His manager, Mr Abraham Kotey Neequaye, disclosed to the Daily Graphic yesterday that his boxer was undergoing intensive training and was confident he would knock out Gusev.

“We are training very hard for this fight; he [Tagoe] badly wants to win and his training regimen has been perfect,” assured Mr Neequaye.

Tagoe’s trainer, Adama Addy also buttressed the claim that the boxer was in good shape and was ready for the 33-year-old Gusev.

“We are not taking any chances. We are training very hard for this bout like any other bout, we are in for an early victory,” he noted.

Gusev (25-5-0) won his most recent fight in Russia last September, a second-round technical knockout victory against Yotchanchai Yakaeo of Thailand and will be seeking to use this month’s fight as a stepping stone to get a world title shot.

A native of Prokopyevsk, Gusev is scheduled to arrive in Accra on January 22 with his trainer and medical team for the title fight.