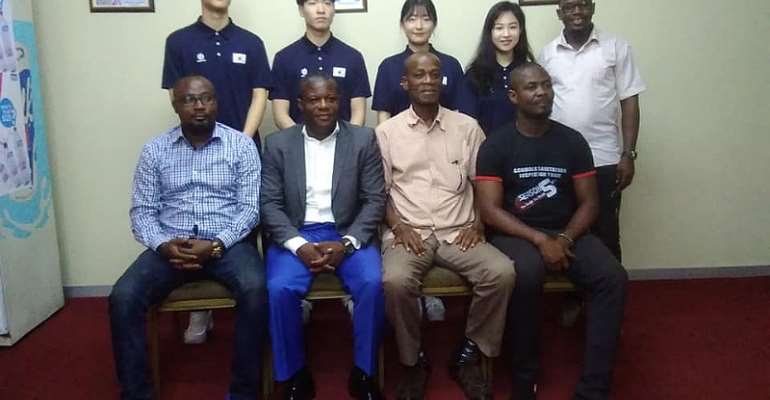 Speaking at the Conference Room of the GOC on Friday when he welcomed three coaches and an interpreter from the World Taekwondo Peace Corps in Korea, he said Taekwondo has been one of the sports that has gained roots not only in Accra, the capital of Ghana but has been spread to many regions and many children are now practicing the Korean Sport.

According to Paul Atchoe, there are many sports disciplines but Taekwondo always shows difference with their programmes and activities which often goes to the grassroots.

He noted that Taekwondo has been established and has firm foundation in Ghana, and it is good that the Federation is taking the sport to the schools with the children as the main focus to build in them the skills in sparring, posing and demonstration.

Mr Otu Lartey, the President of the Ghana Taekwondo Federation (GTF) said this is the third time that they are having coaches from the Taekwondo Peace Corps and he hopes the objective of coming to Ghana would be achieved.

He said they will visit three places, Dansoman, Spintex and Adenta to interact and train pupils who are interested alongside practitioners till February 15, 2019, and also organize Refereeing and Coaching courses in March and April respectively.

Charles Osei Assibey, President of the Ghana Arm Wrestling Association who was at the meeting said sports is very expensive to run in Ghana, and commended the coaches for deciding to take it to the kids.

Emmanuel Olla Williams, GOC Youth Coordinator and CEO of Dreamland Sports Plus also promised to support the programme of the GTF.

He hinted that the Dansoman programme would be held at St. Benedict and Martin De Pores School, and urged parents and teachers to support the programme as Taekwondo is a sport for self-defence and has many benefits.

Taekwodo is a Korean martial art characterized by its emphasis on head-height kicks, jumping and spinning kicks as well as fast kicking techniques